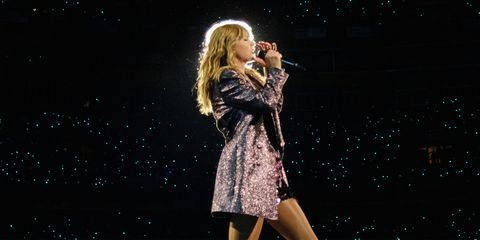 Considering Taylor Swift has been performing since she was a teenager, it's no shocker that she's a certified pro by now. And over the weekend, the singer proved just how seasoned she is during a major stage malfunction on her Reputation tour. In multiple videos captured by fans, it appears that Swift got stuck while suspended mid-air during her Philadelphia concert on Saturday evening.

During her performance of Delicate, Swift was supposed to be lifted from one stage to another. "I'm pretty sure I'm stuck up here," she was heard telling the crowd. "It's a really nice view though." But after she was released, Swift was hit with another problem: She had to figure out how to get to the second stage. "Is there a way for me walk?" she laughs as she asks the crew backstage.

So in the middle of #Delicate, #TaylorSwift noticed that she was kind of stuck in mid air... @taylorswift13 #ReputationTour pic.twitter.com/Nym50Wy7Vp

She is the most precious little bean!!!!!! #Taylorswift #reputationStadiumTour #reptourphilly

Swift keeps it cool (like, impressively so) as her crew works to find a solution—and in an effort to keep her audience entertained, she surprises them with two acapella performances.

@krystalkan -Tonight Taylor performed TWO unrehearsed songs because her lift broke (and she had to improvise with her other one) WHILE she was sick. She started this as acapella. This is class and show-womanship at its finest. #reptourphilly #taylorswift #wildestdreamsinphilly @taylorswift @taylornation

Suffice it to say, the Philadelphia crowd was left with a night to remember. And as Swift continues her Reputation tour (which goes through November), we'll safely assume that the singer will be equipped to handle anything that's thrown her way.

Related Story
Taylor Swift and Sugarland's "Babe" Video
Ruby Buddemeyer Beauty Editor Ruby is the beauty editor at Cosmopolitan, where she covers beauty across print and digital.
Advertisement - Continue Reading Below
More From Celebrity
Dolly Parton, Icon, Started a Viral Meme
Kylie Threw Stormi the Most Elaborate Party
Advertisement - Continue Reading Below
Chrissy and John Had a Post-Grammys Dance Party
Selena Gomez Sent an Emotional Note to Demi Lovato
Nick Jonas Had Food In His Teeth at the Grammys
Why Isn't Beyonce at the 2020 Grammys?
Watch Demi Lovato's Emotional Grammys Performance
Beyoncé's Pre-Grammys Look
Blake and Gwen Were Too Cute at the Grammys
The Jonas Brothers' Grammys Performance Was a Lot