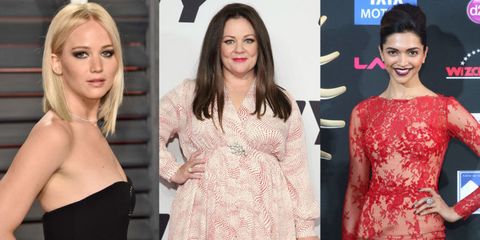 Forbes released its annual list of the top-earning actresses in Hollywood and, we have to say, we're pleasantly surprised by some of what the list reveals.

In a totally unsurprising turn, 26-year-old actress/aspirational BFF of the internet Jennifer Lawrence took the top spot for the second year in a row, earning $46 million. But while there are plenty of mainstream mainstays, there are some other great reveals as well.

The always-hilarious Melissa McCarthy took the second spot on the list this year with $33 million in earnings. McCarthy's rise up the Forbes list is wonderful and signals an important change in Hollywood and in what moviegoers expect from a leading lady. McCarthy isn't the only woman bringing some much-needed diversity to the Forbes list.

As E! Online points out, half of the top-earning women are over 40 and two women of color made it to the top 10 this year (although we'd like to see that number go up for next year's list). Chinese actress Fan Bingbing appeared on the list for the second year in a row and Indian actress Deepika Padukone was the only newcomer to break into the top 10 this year.

With women like McCarthy, Bingbing, and Padukone bringing in major bucks at the box office, hopefully Hollywood will continue to reevaluate what a leading lady looks like and bring us more and more diverse stories.