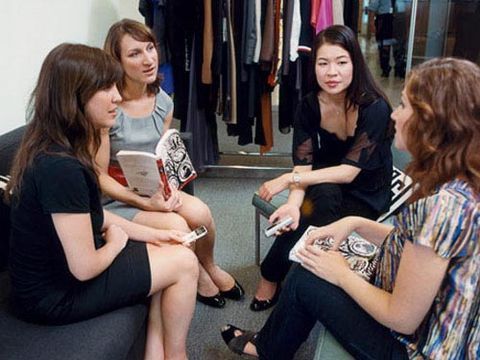 Who's her daddy? The book club digs into Lauren Groff's The Monsters of Templeton to uncover the familial mystery rooted in a small, supernatural town.

NING: I felt like I was in grade school reading The Lion, the Witch, and the Wardrobe or some other kids' book. There was a little bit of history, some mystery, and then the supernatural. It was good — but it was an easy read.

LAUREN: I liked the book but I thought her writing often got in the way of her story. If she used the phrase "not unlike" one more time ... I can't stand a double negative.

SARAH: I'm iffy. I liked the forward-moving plot — of her coming home pregnant and wondering if the married guy who knocked her up was going to call even as she has this budding relationship with a townie. But I didn't like all the flashbacks to her ancestors. It reminded me of the narrative structure of Lost — only not as good.

YAEL: But the flashbacks were the best parts! They were all part of the mystery of who Willie's father is. Yes, some were better than others, but what made all of them so interesting was how they circle back to Marmaduke Temple, the patriarch of the town, who was sleeping with everyone, and who we know is the one ancestor both of Willie's parents have in common. It was the piecing together of a family tree, and I loved that.

SARAH: Did you actually look at the family tree that she drew out for you?

YAEL: I didn't at the beginning but about halfway through I really started to study it — it helped me keep all the characters in order.

NING: I liked the flashbacks but it was weird — for the most part she's doing research to investigate her family history. And while some of the flashback chapters were based on documents Willie uncovered, other chapters seemed to be random retellings in the voices of ancestors that weren't based on anything Willie had discovered through her research.

SARAH: Can we talk about the monster that comes up out of the lake on the very first page? I actually loved the monster — the physicality of it. Like when she writes, "...with its delicate hand curled on its chest. A large, yellow, lumpy thing, looking not unlike a half submerged ball of butter." I loved that.

LAUREN: Are you kidding? I circled the same line because I thought it was a perfect example of her trying too hard.

SARAH: But she didn't use the green swampy cliché and that surprised me. My one complaint is that the monster itself was such a blatant metaphor: The beast is unearthed from the deep, while Willie, the archaeologist, is unearthing the secrets of the town. It's like: I get it.

LAUREN: Except that the monster was the sweetness of the town and the town suffers a major loss after they lost the monster. So I think it's a little more subversive than that — a monster that isn't hideous, but beautiful and sad.

NING: I loved the ghost in her house. That pulsating blob that chased out the first boy she brought home. It was comforting that in her crazy childhood, there was at least someone or something looking out for her.

LAUREN: The one moment I could really relate to was when Willie was drunk and she was telling the handsome Zeke that she was smart enough not to get involved with him in high school, but that she wasn't so smart anymore. It reminded me of the stringent rules and standards I had in high school and how those went out the window as I got older.

SARAH: Because you think there are guys out there that are so much better for you. Then you go out there, and, well...