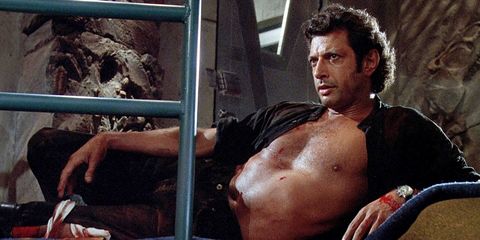 Today in things that are weird, but I ultimately feel okay about: There is a new, hot statue of Jeff Goldblum in London and I like it. A lot.

The 25-foot likeness of the actor was erected in front of London Bridge in honor of Jurassic Park's 25th anniversary. The figure portrays Goldblum shirtless, as God intended, and splayed out just as he was in the iconic scene in Jurassic Park, and as he is, always, in all of our minds.

"Yes, if anybody asks, I disrobe at the drop of a hat," Goldblum told The Today Show back in May. But honestly, who needs that (okay fine, we all do), when we have this magnificent effigy of Goldblum's shirtlessness to admire!? One can only assume after the world sees the gloriousness of this sculpture it will permanently remain on display. I wouldn't be surprised if the Queen catches sight of this hunk of bronze and demands it be moved to the front of Buckingham Palace (or, you know, whatever side her bedroom window is on). Anyway, what I'm trying to say is metal Jeff Goldblum is hot (probably literally, too, since it's like 80 degrees in London right now):

Those beach chairs are genius. Offended I wasn't invited to this viewing party.

But frankly, it isn't all that surprising; Goldblum's sexy statue isn't the first of its kind.

You must allow me to tell you how ardently I admire and love this statue of Mr. Darcy.

And of course, crushing hard on this classic, my marble pal David:

Sally Holmes Editor in Chief Sally is the Editor in Chief of Marie Claire where she oversees coverage of all the things the Marie Claire reader wants to know about, including politics, beauty, fashion, and celebs.
This content is created and maintained by a third party, and imported onto this page to help users provide their email addresses. You may be able to find more information about this and similar content at piano.io
Advertisement - Continue Reading Below
More From Celebrity
Celebs Reveal Their Worst On-Screen Kisses
Duchess Kate Looks Stunning in a Pink Suit
Advertisement - Continue Reading Below
Diana's Friend Shared a Rare Pic of Her on a Yacht
John Shared a Cute Pic of Chrissy, Luna, and Miles
The Royal Family Will Be Split Up at Christmas
Courteney Cox Recreated Her Iconic Turkey Dance
Royals Knew of Meghan's Miscarriage Before Op-Ed
Royals Feel "Great Sadness" for Meghan and Harry
How Celebs Are Celebrating Thanksgiving This Year
Kristen Stewart Is "Protective" of Princess Diana