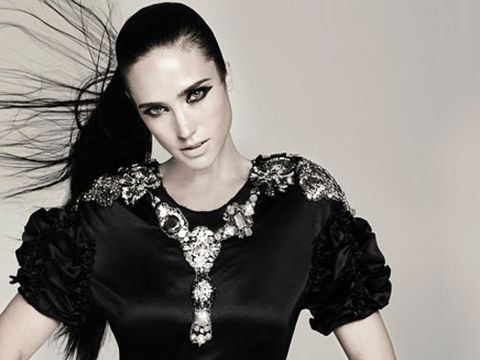 This much we know about Jennifer Connelly: She's devastatingly pretty. She won an Oscar for her work in 2001's A Beautiful Mind. Her latest, The Day the Earth Stood Still, with Keanu Reeves, opens this month; He's Just Not That Into You premieres in February. She has two sons — Kai, 11, and Stellan, 5 — and she's married to British actor Paul Bettany. About to turn 39, she is the face of the Balenciaga campaign. And she is remarkably private and classy for someone who works in Hollywood.

Pink Lady apples. "Three a day. I eat so many apples, it's stupid."

Speaking Italian. "It's so much fun. It's such a crisp and bright-sounding language."

Vodka. "Chilled. No ice. Just a tiny bit of orange juice, or with soda and lime."

Family photographs. "Right over my bed I've stuck on a black-and-white photo-booth strip of Paul, Kai, and Stelli, and another of Kai and Stelli with my dad." (Connelly's father passed away in September.)

Attending Comic-Con, the comics convention, with Keanu Reeves last July. "It was like going with a Beatle. Women had little handwritten signs that said, 'I love you, Keanu.' And he'd just open his mouth, and they'd start screaming."

Visiting Africa's Kalahari Desert with her family. "We all walked away from each other and lay down on the sand. It's crusty, like salt flats. We were just silent for a while."

Home. "I became a mom before I became a wife. When I had kids, I felt I had a home like I'd never experienced before."

A hot LBD "You can just fold it up and throw it in your bag. It always works."

Making He's Just Not That Into You. "It's about being a girlfriend. A lot of my scenes were with other women. I liked that."

Doing crafts. "I have a Bedazzler! The last time we whipped it out was for Stellan's birthday. I sewed capes for all the kids, and then they decorated them with fabric, paint, jewels, and buttons."

Running. "Six to 10 miles on trails through the woods at our place up in the country."

Scooby-Doo. "I love that he's an American hero who is absolutely, 100 percent cowardly."

Sushi. "We eat it three nights a week."

Joan of Arc, as painted by Jules Bastien-Lepage. "She's holding onto a tree and looking up at the sky. There's something hauntingly beautiful about the woman in the painting."

Camping. "We all cram into our little tent - even our dog, Pip, an Australian shepherd. She's got a little saddlebag, and she carries the pots and pans, and she goes clunk clunk clunk all the way up the mountain."

Turkey burgers. "I'd been vegan for many years, and then all of a sudden when I was pregnant with Kai, I wanted a turkey burger. That was the end of my being vegan."

Stellan's beaded necklace. "Kai made it for him, and he's been wearing it for two-and-a-half years now. He also wears a necklace of mine. My son is completely bejeweled."

Yoga. "I get myself into some weird contortion poses in my trailer. I like the way it makes me feel when I'm standing and walking - more integrated."

Playing charades with the boys.

Winning the Oscar. "In that moment, standing there, I felt completely, entirely flabbergasted."

Being a tomboy. "As a kid, I was into Matchbox cars, climbing trees, and jumping off things."

Making low-budget films. "You have a much tighter shooting schedule, so you're not hanging around, waiting. When I go to work, I like to work."

Evel Knievel. "He was the coolest. He had that outfit with stars! Jumping over things on a motorcycle! He was the ultimate hero."

Advertisement - Continue Reading Below
More From Celebrity
Dolly Parton, Icon, Started a Viral Meme
Meghan & Harry's Trademark's Been Blocked for Now
Advertisement - Continue Reading Below
Khloe Kardashian's House Has a Room for Extensions
Katie Holmes Stuns in a White Oversize Coat
Taylor Swift Opens Up About Past Eating Disorder
Courteney Cox's 'Friends' Photo Has a Sweet Secret
Celebrities With Kids You Didn't Know About
People Think Prince Charles Ignored Mike Pence
Brad Responded to Those Photos With Jen
Meghan Markle Would Love to Be the Breadwinner