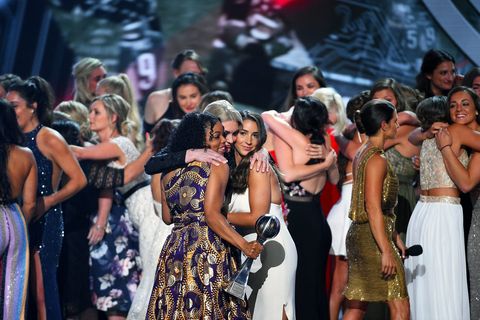 The single most powerful moment of last night’s 2018 ESPY Awards—and possibly in all ESPY history—saw over 140 female athletes take the ESPY stage together. The collective of strong women were honored by the ESPYs for their courage in standing up to voice their stories of sexual abuse when many in the industry had refused to listen.

Among the group were Aly Raisman, gymnast Jordyn Wieber, Tiffany Thomas Lopez, and Sarah Klein. All stood as representatives for the survivors who spoke out against the decades of abuse they received at the hands of Larry Nassar, who was convicted earlier this year of decades of molestation and abuse of the young girls in his care.

Actress Jennifer Garner opened the presentation with a speech that urged the audience to listen to the frank truth of their experiences: "We're about to tell you a story that is difficult to hear. It's a story about what can happen in sports when something goes terribly wrong, when the dream of being an athlete turns into a nightmare."

"Even if the story we're about to tell you is hard to hear, we have to hear it,” the actress said.

An emotional video followed, featuring Aly Raisman and a number of other athletes sharing their own stories and urging the industry to never allow something of its kind to happen again.

"All those years we were told, 'You are wrong, you misunderstood. He's a doctor. It's OK. Don't worry. We've got it covered. Be careful, there are risks involved.' The intention? To silence us in favor of money, medals and reputation.”

The gold medalist continued: "Predators thrive in silence...Whether you act or do nothing, you are shaping the world we live in… All we needed was one adult to have the integrity to stand between us and Larry Nassar. If just one adult had listened, believed and acted, the people standing before you on this stage would have never met him...To all the survivors out there, don't let anyone rewrite your story. Your truth does matter. You matter and you are not alone."

Collectively, the women received the Arthur Ashe Courage Award in tribute to their bravery at Wednesday evening’s ceremony.

Lucy Wood Contributor, MarieClaire.com Lucy Wood spends most of her time writing about celebby things, reading books, and waiting for the glorious day that she have enough millions for a pet sloth.
This content is created and maintained by a third party, and imported onto this page to help users provide their email addresses. You may be able to find more information about this and similar content at piano.io
Advertisement - Continue Reading Below
More From Celebrity
Lilibet May Be Christened in California After All
The Sweet Family Photos in Prince William's Office
Advertisement - Continue Reading Below
Royal Family Members Can’t Eat Pasta or Potatoes
Prince George Is an Environmentalist, Too
Salma Hayek Looked Super Hot in Leopard Print
Britney Spears Just Trolled Justin Timberlake
Billie Eilish Says Kate and Will Were "So Normal"
Prince William Slammed Billionaires' "Space Race"
Lady Gaga Draped Herself in $100 Bills
Kate Middleton Wore Green to Celebrate Nature