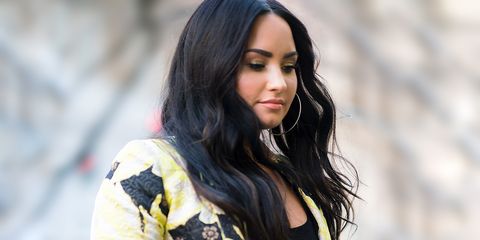 On Tuesday afternoon, TMZ reported that Demi Lovato had been rushed to the hospital due to an apparent drug overdose. Although the 25-year-old singer is now “awake and with her family,” according to a statement from Lovato’s representative, and heading back to rehab, relapsing must have been devastating for her. I know this because, as a recovering addict, I too have relapsed. More than once.

Demi Lovato was 18 when she first entered rehab for her “physical and emotional issues,” which included drug and alcohol addictions and co-occurring disorders of depression and an eating disorder. I was 29 when I finally recognized that I had a serious problem with alcohol and needed help. I went to rehab shortly afterwards, only to discover that, like almost eight million Americans, I, too, had a co-occurring disorder.

At rehab, I learned that my alcoholism was directly related to undiagnosed and untreated anxiety. Thanks to a therapist, I was able to get help. After four weeks in rehab and two months in sober living, I returned to my life and work. But it wasn’t long before small lapses began to occur.

I left rehab, but my stress and anxiety were still there. I thought that I was managing my sobriety just fine by finding work I could do from home and not going out with friends. What I didn’t realize at the time, however, is that I was isolating myself, as so many addicts before me have done.

During my "active" addiction, I thought I had been drinking normally. Like many women in their 20s, I lived an exciting life in a big city, working and dating and making new friends. But my drinking had slowly increased until, eventually, I was blacking out on the weekends in order to relax. I told myself that it was no big deal because it didn’t happen often—but soon enough it was happening more and more.

After rehab, I felt isolated. I was no longer the fun girl who went out to happy hour with coworkers, had boozy brunches with my friends, or tried a new neighborhood wine bar on a first date. Without those little pleasures that made life good for so long, I didn’t know where I stood with the people I cared about.

Many of my friends had been extremely supportive of my recovery, but I felt awkward around them. When a friend invited me to a new bar that had opened in our neighborhood, I didn’t want to say “no” because it was a chance to see him and meet new people, which I desperately wanted to do. I told myself that it would be a test that I could pass. I would attend the outing but I would not drink there. And, to my surprise and delight, I succeeded. Until I didn’t.

"What I didn’t understand at the time is that relapses are often part of the recovery journey."

On the way home, I stopped at a liquor store, bought a bottle of vodka, and spent the next couple of days drinking and blacking out in the comfort of my home.

A month later, just after Thanksgiving, I met another friend at a wine bar so we could catch up and he could tell me all about his current dating woes. Once more, I didn’t drink while I was out. But once more, I went home and binged on alcohol.

I knew what I was putting my sobriety at risk, but I kept telling myself that it wasn’t a big deal—after all, it was so rare. I wasn’t hurting anyone, I told myself. Deep down, I couldn’t admit that I was slipping, over and over again. I couldn’t bear the thought that I would once again disappoint my loved ones. I kept these brief lapses to myself.

It happened again just before New Year’s and once more in February of the next year.

Still, I didn’t tell anyone.

They were lost weekends here and there. Nobody seemed to notice. The truth is that, ever since I had entered rehab the previous summer, I had distanced myself from my friends. I was ashamed of my drinking problem, and I had a growing sense of guilt about still being “weak” around alcohol.

I could control myself sometimes—why couldn’t I control myself all the time? Despite knowing that addiction is a disease, I questioned myself. I didn’t let friends into my inner life anymore, and I had long stopped going to my therapist. I had stopped working on my recovery.

That April, I relapsed again. This time, with consequences.

I was in Miami attending a conference for a new job, and it happened again: I went out to dinner with clients and my new boss, and everyone drank but me. But when I got back to my hotel room, I ravaged the mini bar as if I had been dehydrated for days. The next day, I didn’t show up to work. A couple days later, my family came to get me help once more.

With five relapses behind me in the eight months since I had left rehab, I needed to change my life more dramatically. I packed up my bags and moved home to Florida to live with my parents while I figured things out. I reconnected with my therapist, who promptly suggested we do Skype sessions in order to continue to work on my recovery. And I tried to repair the friendships I had been neglecting since first entering rehab.

What I didn’t understand at the time is that relapses are often part of the recovery journey. I felt guilty and ashamed over my repeated attempts to stop drinking, but my therapist assured me that I wasn’t a failure and encouraged me to surround myself with people I cared about.

I don't know what Demi Lovato is going through right now, and her family has asked fans not to speculate “as her health and recovery is the most important thing right now." But if her relapse is anything like mine, I imagine she's facing the same guilt and shame I felt over hurting loved ones once more. Over not having power to control my disease. Over not being strong enough to handle this. I imagine it’s not easy for her to see fans and celebrities alike show their support on social media while others malign her and call her a “mess” and a “crackhead.”

What she needs now, and what I needed then, is continued love and support. We addicts often feel that, especially after a relapse, we don’t deserve the encouragement of those we care about and hurt. But at the end of the day, love is precisely the thing that we need.

Every addict’s story is different. They may abuse different drugs, be it alcohol or heroin or prescription medication. They may go to rehab. They may relapse once or twice or 20 times or never. They may attend group meetings or go to therapy or practice daily meditation. Whatever their recovery journey is, though, we need to take a lesson from Lovato’s book and continue to tell our stories and be advocates for mental health and recovery.

I’ve been sober for more than two years now. As my story and Lovato’s story go on, I can only hope that we addicts continue to receive the thing we need most—and the thing that can keep us from relapsing once more: support. Given the positive outpouring of emotion over Lovato’s relapse, I can only hope she hears the message loud and clear: That we love her and and that she is not alone. I wish I had remembered that message earlier in my sobriety but, thankfully, I remember it now.

Related Story
Celebrities Support Demi Lovato Following Overdose
This content is created and maintained by a third party, and imported onto this page to help users provide their email addresses. You may be able to find more information about this and similar content at piano.io
Advertisement - Continue Reading Below
More From Celebrity
Jennifer Lopez and Ben Affleck: Everything We Know
Harry & Oprah's Mental Health Doc Has a Title
Advertisement - Continue Reading Below
Serena Williams Might Miss the Tokyo Olympics
Jennifer and Ben Have "Unreal" Chemistry Together
The Sussexes Marked Archie's Bday in a Lovely Way
Queen's Cousin Accused of Selling Access to Putin
Meghan Wore a Meaningful Necklace for Vax Live
How Celebrities Are Celebrating Mother's Day 2021
Gabrielle and Kaavia's Mother's Day Pic is So Cute
Ben Affleck's Moving Tribute to Jennifer Garner