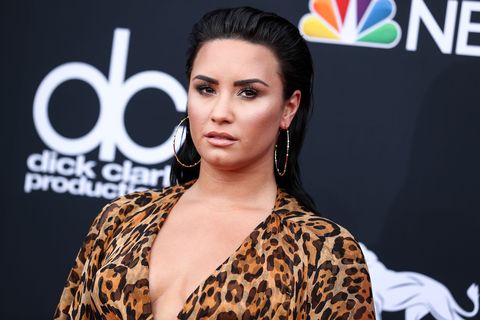 Singer Demi Lovato has reportedly suffered an overdose and was transported to a hospital in the Hollywood Hills area just before noon Tuesday, according to TMZ. The site reports that Lovato is believed to have overdosed on heroin, though this has not been confirmed. Little information is known about her current condition.

The LAPD confirmed to The Hollywood Reporter that they were called to a home on Lovato's block on Tuesday for a suspected overdose, but did not confirm that the person they treated was Lovato. Meanwhile, TMZ updated its report with the information that Demi had allegedly been treated with Narcan, which is developed to treat narcotic overdoses. People reports that Lovato is currently "okay and stable."

The singer has been refreshingly open about her longtime struggle with drug addiction. In June, she released a song called "Sober," in which she sang: "Momma, I'm so sorry, I'm not sober anymore." She posted a clip of the song to Instagram with the caption, "My truth."

Days later, Lovato appeared to hint via Instagram that she was doing better. "Tonight I took the stage, a new person with a new life. Thank you to everyone who has supported me throughout this journey. It will never be forgotten," she wrote on Instagram on June 24.

Prior to releasing the song, Lovato had been sober for six years.

Last year, Lovato released a documentary about her life named Simply Complicated. In the documentary, she spoke candidly about her addiction: "My dad was an addict and an alcoholic. Guess I always searched for what he found in drugs and alcohol because it fulfilled him and he chose that over a family," she said.

She added of her recovery: "I was using while I had a sober companion and I went through like 20 sober companions. I was either craving drugs or on drugs."

After the news broke, Ariana Grande posted a tribute to her friend via Twitter. Other celebrities, like Ellen DeGeneres, also shared messages of love.

I love @DDLovato so much. It breaks my heart that she is going through this. She is a light in this world, and I am sending my love to her and her family.

I love you @ddlovato and I’m praying for your strength and health.

MarieClaire.com has reached out to Lovato's publicist.