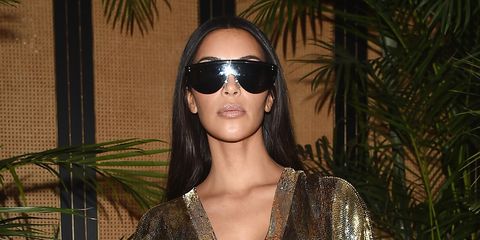 Have you ever wondered, "What would the world be like if Kim Kardashian were the star of a blockbuster science fiction franchise?" Follow-up question: Are you at least asking yourself that now? I sure hope so, because Kim just kind of gave us the answer to that question in her latest Instagram post.

In the shot, Kim looks completely space age-inspired in head-to-toe (well, head to upper thigh, anyway) silver. With her very reflective sunglasses and super sleek, dark bob, Kim looks ready to star in her own Fifth Element-style sci-fi epic. And, with the very sheer material the long-sleeved, almost iridescent silver top is made of, she's also low-key freeing the nipple.

"Energy doesn’t lie so trust those vibes you’re getting," Kim captioned the photo. Clearly, her vibes are 22nd Century Chic.

But back to the kind-of visible nipple: It is both very Kardashian and, perhaps inadvertently, very true to at least one famous sci-fi franchise. Before her untimely death, Carrie Fisher (aka Princess Leia) famously explained that Star Wars director George Lucas was adamant that there are no bras in space.

"George [Lucas] comes up to me the first day of filming, and he takes one look at the dress and says, ‘You can’t wear a bra under that dress … because there is no underwear in space,'" the actress wrote in her 2008 book, Wishful Drinking. "I promise you this is true, and he says it with such conviction too! Like he had been to space and looked around and he didn’t see any bras or panties or briefs anywhere."

Why? Apparently because the bra would kill you in space.

"So, what happens if you go to space and you become weightless," Fisher wrote of the explanation behind Lucas' logic. "So far so good, right? But then your body expands??? But your bra doesn’t — so you get strangled by your own bra."

Anyway, that's a very long way of explaining that Kim Kardashian is ready to jump right in to the Star Wars franchise, if Disney is still casting any cameos for Episode 9.