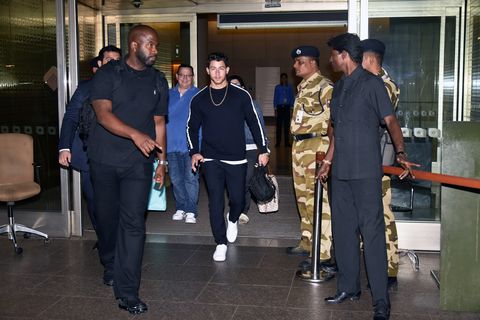 If you needed more proof of Priyanka Chopra and Nick Jonas' engagement than the gigantic rock hanging out on her finger, here you go: On Thursday evening, the Jonas family arrived in Mumbai, presumably for the couple's engagement party. The newly engaged Jonas arrived with his parents, Paul and Denise, at the Chhatrapati Shivaji International Airport. Paul was carrying a huge Tiffany & Co bag—probably a gift for Chopra's own parents—and both parents were beaming from ear to ear.

Tiffany & Co already holds special meaning for Chopra and Jonas: He reportedly shut down the London store to pick out the perfect ring for his now-fiancé, proposing shortly thereafter on Chopra's 36th birthday. A friend of Chopra's this week shared the first picture of Chopra with her massive diamond, which is rumored to have cost $200,000.

This weekend, the Jonas and Chopra families are set to meet for the first time at the couple's lavish engagement party in Mumbai. It was already an important week for the Jonas family: Paul and Denise celebrated their 33rd anniversary on Thursday, Nick revealed via Twitter. "Happy Anniversary mom and dad. 33 years is a beautiful thing. Love you!" he wrote.

Peecee and I getting our pouts in order ! 😂 #potraitlighting💡 #shotoniphonex

The couple has so far refused to comment publicly on their engagement (although Jonas did thank a fan who congratulated him). That said, Chopra and Jonas have made no secret of their relationship, and have been pictured out and about on numerous occasions—not to mention all of that Instagram flirting.

Of their trip to India prior to the engagement, Chopra told People: “We’re getting to know each other and I think it was a great experience for him. That’s what he said. I think he really enjoyed it. It was really beautiful. He had a great time.”

Little is known for sure about the engagement party, but local sources claim that 200 rooms have been booked at a nearby hotel where guests can stay.

The reported guest list reads like a who's who of Bollywood: Ranveer Singh, Karan Johar, and Raveena Tandon, to name a few. Chopra's family are expected to host. I guess my invite got lost in the mail?!