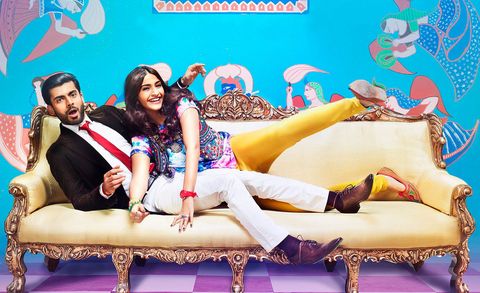 Dubbed "Bollywood" (after the city formerly known as Bombay, where the industry is based) by movie enthusiasts, the Hindi-language film industry accounts for a major portion of the global film space and continues to grow with each title it pumps out. Bollywood beats out Nigeria's Nollywood as well as Hollywood to be the world's largest film industry in terms of output and reach, its content appealing to movie-goers in every corner of the world.

But what is it exactly that makes Bollywood so epic, its films so special? Some argue that there's a tried-and-true formula to any quality Bollywood film: swoon-worthy romance, swelling soundtracks, ridiculously attractive lead characters, and plot twists that you can see coming from a mile away. Others say that Bollywood's secret is far simpler—it's just a damn good time from beginning to end.

Either way, these films are well worth the two-plus hours (Bollywood movies are notoriously long) you'll probably have to block off in your day to watch them. Whether you're a fan of romance, tragedy, or comedy, there's definitely a film for you in this colorful world. Below, a list of Bollywood staples that you need to add to your watch list, from epic historical dramas to kickass action movies.

You can't talk about Bollywood without mentioning Dilwale Dulhania Le Jayenge. The 1995 classic is widely considered the golden standard for Bollywood rom-coms, featuring a cheeky Shah Rukh Khan and starlet Kajol (and her signature unibrow) as two young people who fall in love on a backpacking trip across Europe.

When shy Rani Mehra gets left at the altar on her wedding day, she shocks her conservative family and friends by turning what was supposed to be a romantic honeymoon for two into an ambitious solo trip.

Ready to cry, laugh, and then cry a little more? Barfi! is about the misadventures of a happy-go-lucky man who makes the most of life. The film stars Bollywood favorites Ranbir Kapoor as Barfi and Priyanka Chopra as his love interest Jhilmil, a young woman on the autism spectrum.

Lifelong best friends Imran, Arjun, and Kabir finally make good on their pact to travel to Spain, but interpersonal conflict threatens to upend their vacation and their friendship.

Hrthrik Roshan and Aishwarya Rai (former Miss World) lead this 2008 romance film about the marriage of convenience turned passionate love affair between a Rajput princess and a Mughal king that is jeopardized by the threat of a looming religious war. Jodhaa Akbar will make you believe in love again—trust me.

Priyanka Chopra stars in the inspirational sports film as real life boxing icon Chungneijang Mary Kom Hmangte, who went from farming the fields of Manipur to fighting in the ring and becoming a six-time World Amateur Boxing champion.

Haider takes the well-known play that is William Shakespeare's Hamlet and lets the tragedy play out in a totally different, equally grim setting: right in the the middle of the Kashmir conflicts of 1995.

What do you get when you take some of Bollywood's most prolific actors (like Amitabh Bachchan, Shah Rukh Khan, Hrithik Roshan, Kajol, and Kareena Kapoor) and put them all in one movie about a well-off, prominent family in Delhi struggling to maintain its legacy? Kabhi Khushi Kabhie Gham, that's what. The family drama is a heartbreaking story about the ties that bind us but can also break us, and it's so, so, so good.

A career-driven but socially awkward physical therapist gets the opportunity of a lifetime when she's hired by the Rajasthan royal family to nurse the king back to health. However, she gets thrown off her game by the presence of the family's extremely hot prince and his snobbish mother. Romantic shenanigans and misunderstandings ensue, and honestly, what else would we expect from a Disney movie?

This coming-of-age dramedy follows three engineering students' trials and tribulations as young people, offering a tongue-in-check critique of the state of the Indian education system and the stress it creates.

Action icon Salman Khan plays an Indian secret agent nicknamed "Tiger" who is sent to Ireland on a mission to keep tabs on a renowned scientist suspected may be aiding the defense strategies of Pakistan.

Shah Rukh Khan (told you he'd appear on this list a lot) takes on the titular role of Devdas, a man who returns to India after previously leaving the country to study law in England. His forbidden love leads him to a battle with alcoholism that impacts the lives of the people that he loves most.

There's only been one thing getting in the way of aspiring teacher Naina making her dream of landing a job as a teacher at the high school that she attended come true: her Tourette's syndrome. And even when Naina is able to finally become a teacher, her troublemaking class presents a new issue, making her wonder if her dreams really are within reach.

A case of mistaken identity leads to love in this 2003 romantic comedy starring Bollywood heavyweights Hrthrik Roshan and Kareena Kapoor.

(Note: Pay no attention to the animated talking parrot that shows up from time to time—2003 was a whole different world.)

Model-turned-flight attendant Neerja Bhanot comes face to face with a group of terrorists intent on hijacking her flight. The film is based on the true story of the Abu Nidal Organization's hijacking of Pan Am Flight 73 in 1986.

When Peshwa Bajirao (Ranveer Singh) falls for Mastani (Deepika Padukone), the daughter of a Rajput king in need of his fighting prowess, despite already being married to Kashibai (Priyanka Chopra) a ill-fated love triangle forms that alters the very course of their lives.

Fun fact: Bajirao Mastani marks Singh and Padukone's second onscreen romance after starring in Ram Leela in 2013, and the two actors tied the knot IRL in 2018!

In one of those rare cases where the sequel surpasses the original, Dhoom 2 is believed by many to be the best film in the Dhoom franchise (which, by the way, is the the second largest Bollywood film franchise in terms of box-office revenue). Think Fast and Furious, but in Hindi and complete with lively musical numbers.

LGTBQ narratives are slowly but surely making their way into mainstream Bollywood cinema, and EK Ladki Ko Dekha Toh Aisa Laga is helping lead the way. The heartwarming film depicts a closeted woman's journey to personal freedom and her fight for acceptance from her traditional family.

Lovely Singh is assigned to be the bodyguard for Divya, the beloved daughter of a national politician with many enemies, but things get complicated when Lovely finds himself falling in love on the job. There are cool fight sequences and fun dance breaks in this one—we love duality!

Related Stories
25 Animated Movies Every Adult Should Watch
The 40 Best Musical Movies Ever Made
Ineye Komonibo Ineye (in-NAY-yay) Komonibo is the editorial fellow at MarieClaire.com.
Advertisement - Continue Reading Below
More From Unmissable Movies
Unmissable Horror Movies Coming Out This Year
The Best Romantic Films of the Year (So Far)
Advertisement - Continue Reading Below
The Documentaries You Can't Afford to Miss in 2020
Movies That Are Bringing the Drama in 2020
The Best New Bollywood Movies
The Most Exhilarating Thrillers of 2020 (So Far)
The Films That'll Have You Laughing Through 2020
The Sexiest Blockbusters Coming Out This Year
These Are the Most Anticipated Movies of 2020
The Best Crime Movies Ever Made