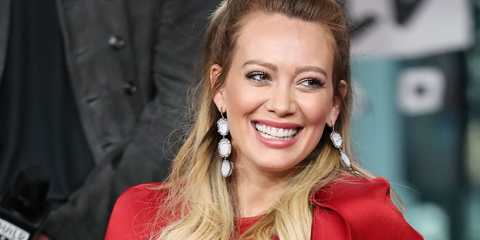 In case you haven’t been dutifully watching Younger every Tuesday night for the last three years like I have, then first of all, WTF are you doing with your life? Go binge it! Second, no really, right now! And third, last night was the final episode of season five and I have some thoughts.

Luckily, so does Hilary Duff. She stars as twentysomething Kelsey Peters in the hit TV Land show, and was kind enough to chat with me about all of the drama that went down last night.

Warning: There are spoilers ahead, so either go watch the August 28 episode of Younger first, or read at your own risk.

MarieClaire.com: So, we finally see Zane and Kelsey have a real heart-to-heart moment, and then he just quits Empirical and leaves. What the hell?!

Hilary Duff: I know! It's kind of messed up, isn't it? He was not being a good guy, though. He was just, like, sleeping with her and kind of playing with her, and I really love that she made the choice not to commit to him. Guys date multiple women all the time, and we’re not supposed to talk about it when we’re upset, which I think is a whole other problem for women.

MC: Oh, for sure. I also loved that Kelsey immediately called him out for manipulating her when he professed his love.

HD: Yeah, I thought it was so cool seeing that side of Kelsey—she wasn’t going to put up with it. But I did like that we finally saw Zane’s heart on his sleeve in that moment. Season six is going to be a good season for humanizing Zane; he’s trying to be taken so seriously all the time. I don’t think [Kelsey and Zane] are done, though. It’s chemical when it comes to them; you can’t explain it, but they have this draw for each other.

Related Story
What You Need to Know About 'Younger' Season 6

MC: Were there any parts of the finale that were surprisingly difficult to shoot?

HD: That scene [between Kelsey and Zane] was actually hard for me. It’s really hard to act in scenes like that, where you can’t necessarily take your time and get all the information in because of how short our show is. It’s hard to transition so quickly when somebody tells you they love you. I want a beat to respond instead of immediately arguing with him. But we have so much footage and the show is so short that you can’t always control it!

MC: On that note, can you please make the episodes an hour long, instead of 30 minutes?

HD: People ask me this all the time, and I’m always like, "Trust me, I don’t control it—I wish we could!" My boyfriend said, "I can’t watch this week to week, it’s too short! We need to skip a week so I can watch two of them for a full hour!"

MC: For someone who doesn’t know you personally, I would say Kelsey almost feels like an extension of Hilary Duff IRL. Would you agree?

HD: I feel like we do have a lot in common, actually. Obviously we have different career paths but, like her, I feel like I’ve really hustled from a very young age to be where I am. I’m a mom, so I have more responsibilities in my life that Kelsey does, but if I didn’t I probably would be going out more and getting in trouble like she does! So maybe it’s a good thing I do...?

But Kelsey is the perfect example of a millennial: She maybe goes too hard on a weekday, and her personal life a little bit missy, but she’s got all of her shit figured out. People in their late-20s are still figuring out, I think.

MC: So what’s the most Kelsey-like thing you’ve ever done in your life?

HD: I think negotiating for what I deserve. I’ve been in the business for such a long time, but that’s not a very comfortable place for me. I still feel like, Little ol’ me? I don’t fit in! Is this still real? When I was younger, I had so many people handling the business side of it, and now I’m having to stand up for what I’m worth and I’m constantly fighting for it. Business decisions have to be made, and I do have multiple people advising me, but it doesn’t always line up with what I think.

It’s also not just me anymore—I’m a mom, and I’m trying to be as involved as I can with my son’s life. So sometimes it’s really hard to focus on what I want to work on and negotiate what I want, but I definitely think I channel my inner Kelsey in those moments.

HD: Team Josh! I’ve been very vocal about the fact that I’m Team Josh. He’s just so cute and I love him so much! I felt really bad for him this season, but I’m excited for season six. 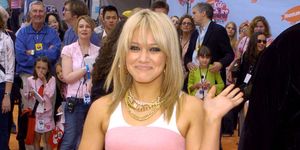 Hilary Duff Critiques Her Most '00s Outfits
Chloe Metzger Deputy Beauty Director Chloe Metzger is the deputy beauty director at Cosmopolitan, obsessively writing about new makeup launches, the best hair products (curly girl here; whattup), and the skincare formulas that really work for every skin type (follow her on Instagram to see behind-the-scenes pics of that magazine life).
This content is created and maintained by a third party, and imported onto this page to help users provide their email addresses. You may be able to find more information about this and similar content at piano.io
Advertisement - Continue Reading Below
More From Celebrity
William Reveals Which of His Kids Is the Cheekiest
Serena Williams's Daughter Is Taking After Mom
Advertisement - Continue Reading Below
EmRata Opts for Faux Fur and Yeezy Boots
Rob Lowe: Prince Harry Is Rocking a Ponytail Now
Rihanna Stuns in $2 Million of Diamonds and Rubies
Fans Think Zayn Just Hinted at Proposing to Gigi
Ben Affleck Said J.Lo Faced "Sexist, Racist" Media
Kate & William Might Get Vaccinated on Camera
40 Rare Photos of Grace Kelly Through the Years
The Best TV and Movie Wedding Dresses of All Time