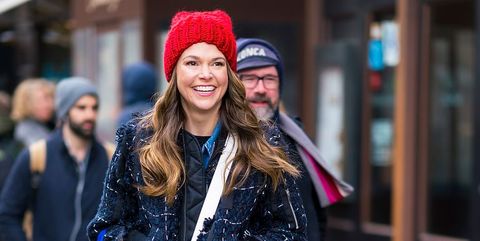 Younger is officially coming back for a sixth season, meaning Liza's lie will continue for at least another year (thankfully).

"Younger exemplifies romantic comedy at its best and each season the show hits new creative and ratings heights," Kevin Kay, president of TV Land, CMT, and Paramount Network, said, according to Deadline. "We are honored to continue to work with the brilliant Darren Star and this amazing cast, led by the multi-talented Sutton Foster. The new season is outstanding and we are thrilled for what’s to come for these beloved characters."

Here's everything we know so far about the show's sixth season.

Since Season 5 is still airing, it's hard to guess where the plot might go in Season 6. Foster, who stars as Liza, told Entertainment Weekly that the current season is the season of Liza and Charles.

"I will say that this is the season of Liza and Charles—it really is," she said. "Are they skipping through the fields happily ever after? Of course not, because this is Younger, but I definitely feel like it gives fans a glimpse into the relationship that we haven’t seen yet, and that’s exciting. They get some hard moments, but we get some really good moments as well."

Foster also told the magazine that her character grows up a lot this season and hinted that the show's plot has been impacted by things that are going on in the real world, like the #MeToo movement.

"I’ll just say that season 5 is where Liza kind of grows up and starts to take responsibility for her actions; she gets some balls," she said. "It’s a real roller coaster, because between season 4 ending and season 5 starting, the real world changed. Darren Star and the writers had an opportunity to do the right thing and represent that, [while] also creating a lot of drama for the show. There’s so many [gasps] moments, but that’s what makes the show so much fun; I’ve just had a ball."

If Foster's teases about Season 5 all play out as expected, Season 6 could see Liza going public with her age at work and dealing with the repercussions of maintaining her lie for so long.

Related Story
An Exclusive Look at 'Younger' Season 5
This content is created and maintained by a third party, and imported onto this page to help users provide their email addresses. You may be able to find more information about this and similar content at piano.io
Advertisement - Continue Reading Below
More From Culture
Wi Ha-joon From 'Squid Game' Is a Rising Star
'Midnight Mass' Was Filmed In British Columbia
Advertisement - Continue Reading Below
'Bachelor In Paradise' Spoilers: Your 2021 Guide
'Bachelor In Paradise' 2021: Everything We Know
'The Great British Baking Show' Release Guide
Love True Crime? Obsess Over These TV Shows
Fans Are Already Clamoring for 'Sex Education' S4
'Bridgerton' Season 2: Everything We Know
Who Is HoYeon Jung From 'Squid Game'?
'Succession' Is Ready to Go 'Full F*cking Beast'