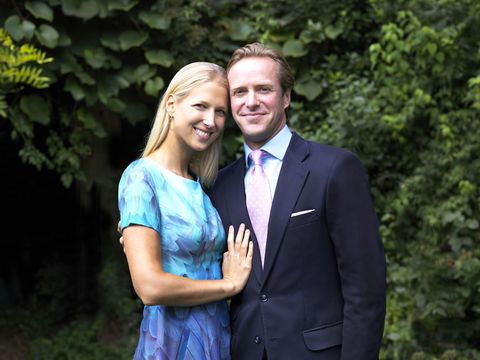 With the big day in May just a distant memory now for Meghan Markle and Prince Harry, and Princess Eugenie’s upcoming nuptials to Jack Brooksbank, your royal wedding obsession has been well and truly satisfied through 2018. But hey, let’s throw another one in for good measure. Buckingham Palace has this morning announced that Lady Gabriella Windsor will marry Mr Thomas Kingston, following his proposal in August and initial plans for the couple to tie the knot in spring 2019.

It’s undoubtedly lovely news, but there is another, much juicier angle to this announcement, too. As far as situations go, your ex-boyfriend being included in family dinners and celebrations is usually less than ideal. So bad luck, Pippa Middleton, because Thomas Kingston happens to be her ex-boyfriend, and Lady Gabriella Windsor is the cousin of Prince Harry and Prince William. A little awkward, perhaps?

If you want to get factual, Lady Gabriella is actually the daughter of Prince Michael of Kent, who is first cousin to Queen Elizabeth, but if you can work out her exact relation to Harry and William, then your brain is better functioning than mine. As Cosmopolitan neatly summed up: “Prince William's grandmother's cousin's daughter is marrying the man who used to go out with his wife's sister.” For argument's sake, cousin works.

The happy engagement news was confirmed on Wednesday morning by the Daily Mail’s royal reporter, Rebecca English, who shared the palace’s official statement. On Twitter, English posted: “Prince and Princess Michael of Kent are delighted to announce the engagement of their daughter Lady Gabriella Windsor to Mr Thomas Kingston. The engagement took place in August; Mr Kingston proposed on the Isle of Sark. The wedding will take place in spring of 2019."

Rebecca went on to explain: “Tom is an ex of Pippa Middleton, the Duchess of Cambridge's sister. She dated the Bristol graduate in 2011. Tom used to procure the release of hostages in Iraq before moving into the world of finance. He and Ella attended Pippa's wedding to James Matthews last year. Small world!”

Kingston remains a private man aside from his relationship with Pippa. 37-year-old Lady Gabriella has worked as a freelance writer after graduating from Brown University, and currently works as a senior director for Branding Latin America.

It remains to be seen whether Pippa will land an invitation to the wedding (although, by then, she will be busy being a mother to her first child). Either way, it is far too early for these family tree dynamics.

Related Story
20 Times Kate and Pippa Middleton Were Style Twins
Lucy Wood Contributor Lucy Wood spends most of her time writing about celebby things, reading books, and waiting for the glorious day that she have enough millions for a pet sloth.
This content is created and maintained by a third party, and imported onto this page to help users provide their email addresses. You may be able to find more information about this and similar content at piano.io
Advertisement - Continue Reading Below
More From The Ultimate Guide to the Royal Family
Harry Pranked the Queen by Changing Her Voicemail
The Queen Laid Down the Law at the Royal Wedding
Advertisement - Continue Reading Below
Why Meghan Might Stop Talking About Social Issues
Diana Compared Royal Life to Wedding Day Stress
The Queen Made Prince Philip Quit Smoking
Queen Elizabeth Honored with New Canadian Portrait
Did Meghan Wear Princess Diana's Cartier Watch?
People Are Upset the Queen Didn't Wear a Mask
Kate Middleton Keeps It Simple in a Blue Dress
The Beauty Products Kate Middleton Swears By