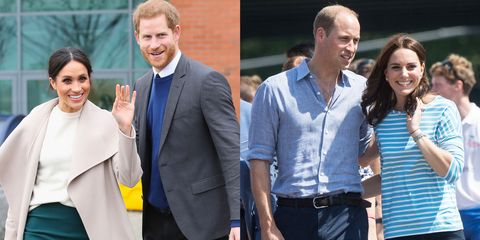 Related Story
Meghan Markle Wears a Disguise While Out in London

Now, thanks to the Daily Mail, we know the code names used for Prince William, Kate Middleton, Prince Harry, and Meghan Markle. Warning: These code names are some of the least glamorous names you will ever read in your life.

Will and Kate are code named "Danny Collins" and "Daphne Clark," according to the Daily Mail, while Harry and Meghan are known as "David Stevens" and "Davina Scott" in coded communications.

"If anyone got hold of a phone belonging to a royal aide or security team member, they won’t find Harry Windsor and Meghan’s names in it," a royal source said, according to Daily Mail. "It is far too risky in the wrong hands."

Don't both trolling around London eavesdropping for mentions of Davina Scott though—that code name has probably already been replaced.

"They get given code names but they are changed regularly for obvious reasons," the source added.

Kayleigh Roberts Contributor Kayleigh Roberts is the weekend editor at Marie Claire, covering celebrity and entertainment news, from actual royals like Kate Middleton and Meghan Markle to Hollywood royalty, like Katie Holmes and Chrissy Teigen.
Advertisement - Continue Reading Below
More From The Ultimate Guide to the Royal Family
Meghan Is Serious About Her Quarantine Precautions
Will Says COVID-19 Is a 'Life and Death Fight'
Advertisement - Continue Reading Below
Sussexes Make Top Hire for New Charity Venture
Inside Harry & Meghan's First Days in LA
Meghan & Harry Reconcile With the Royal Family
Why Kate & William Are Keeping a Low Profile
Your Official Guide to the Royal Family's Tiaras
The Cambridge Children Clap for Healthcare Workers
Meghan Markle Is Narrating a Disney Documentary
Meghan and Harry Might Get New Last Names