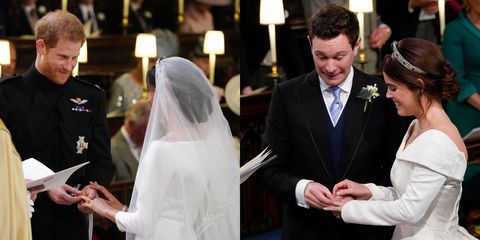 When royals get married, we obsess over their stunning engagement rings, but what about their actual wedding bands? Some royals wear them, others don't. What makes some decide to wear their wedding rings and others to leave them at home? And who is bucking tradition—the wearers or the skippers? Here's everything you need to know about royals and their wedding ring-wearing habits.

Why are wedding rings a thing anyway?

So, let's start at the beginning, which, in this case, is at least 3,000 years ago. The earliest recorded exchanges of wedding rings can be traced back to ancient Egypt. In these old Egyptian marriage ceremonies, the couple would reportedly exchange rings of braided hemp and then replace them down the line with sturdier, more permanent rings made of leather, bone, or ivory. Apparently, the more expensive the material of the ring, the more in love the couple was proclaiming to be—which explains why we spend so damn much on wedding (and engagement) rings today.

What are royal wedding rings made of?

The royal family has its own tradition when it comes to wedding rings. While royal couples have a lot of freedom in choosing their engagement ring, traditionally, their wedding bands are made of Welsh gold. But why?

This is a relatively new tradition, dating back less than a hundred years. The Queen Mother started the tradition in 1923, and royal brides have been using the metal for their wedding bands ever since. What's more, many royal brides in the last century (including the Queen Mother herself, as well as Queen Elizabeth, Princess Margaret, and Princess Diana), had their bands crafted from the same nugget of Welsh gold.

The Queen Mother in 1985.
Getty Images

No gold mining is taking place in Wales today, which means that, eventually, Welsh gold supplies might run out all together. This makes the royals' wedding bands especially rare.

Starting in 1981, a new nugget was needed and the British Royal Legion gave the Queen a 36g, 21-carat Welsh gold nugget to use for future royal wedding rings. That piece of gold was used to create rings for Sarah Ferguson, Camilla Parker-Bowles, Kate Middleton, Meghan Markle, and most recently, Princess Eugenie.

The women in the royal family pretty much all wear wedding bands. Because they continue to wear their very gorgeous and very large engagement rings as well, it can be hard to see the wedding band sometimes, but if you look closely, it's there.

And, we got a clear look at Princess Eugenie's wedding band at her ceremony on October 12:

Many of the men in the royal family have opted not to wear wedding bands, including Prince Philip and Prince William.

"Although it's traditional for royal women to wear both an engagement ring and a wedding ring after they get married, it's never been traditional for royal men to wear one," royal commentator Eloise Parker explains to MarieClaire.com "That's why Prince Philip and Prince William don't wear them. I think when you have a wedding watched by millions, everyone knows you're married!"

Princess Eugenie's new husband, Jack Brooksbank, won't wear a wedding band either, according to a statement from the couple's spokesperson.

Prince Harry, however, decided to buck tradition and he does wear a wedding ring.

Since the royal wedding, Harry has also been spotted fiddling with his ring several times, which body language experts say signals that he's thinking about and missing his wife, Meghan. Body language expert Judi James told The Express:

"Men are often seen fiddling with their wedding rings. In Harry’s case this looks like a self-comfort ritual performed for two reasons, when he's feeling under pressure or lonely. It allows him to create a barrier with his arms but by seeking out his wedding ring to touch and play with it suggests he's missing the back-up and support of his wife here."

"Royal wedding rings are traditionally forged from the same nugget of Welsh gold," Parker says. "There's not much of the original nugget left, so perhaps it's just as well that most royal marriages only require one ring!"

Related Stories
Women Who Hate Their Engagement Rings
Meghan Markle Wore Princess Di's Ring to Reception
Kayleigh Roberts Contributor Kayleigh Roberts is the weekend editor at Marie Claire, covering celebrity and entertainment news, from actual royals like Kate Middleton and Meghan Markle to Hollywood royalty, like Katie Holmes and Chrissy Teigen.
This content is created and maintained by a third party, and imported onto this page to help users provide their email addresses. You may be able to find more information about this and similar content at piano.io
Advertisement - Continue Reading Below
More From The Ultimate Guide to the Royal Family
Comparing the Two Biggest Royal Weddings
How the Queen Ends Awkwardly-Long Handshakes
Advertisement - Continue Reading Below
The Queen Has a Rule Against Bad Talking Family
The Queen Took a Pic of Philip With Her to Funeral
The Queen's Tolerance Was the Key to Her Marriage
Will & Kate Welcomed Harry Back Into Their Group
Queen Left a Handwritten Note on Philip's Coffin
The Queen Said Grief Is the Price We Pay for Love
All of the Photos from Prince Philip's Funeral
The Queen Wore This Brooch to Philip's Funeral