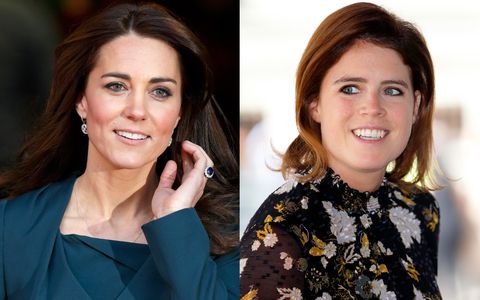 This Friday, October 12, Princess Eugenie will marry Jack Brooksbank in what is sure to be a lavish ceremony at St. George's Chapel in Windsor. While Eugenie's wedding is being compared to left and right to Prince Harry and Meghan Markle's May affair (same year, same venue, same very famous grandmother — comparisons were bound to happen), there's one thing about her engagement that actually bares a striking resemblance Prince William and Kate Middleton's: Her engagement ring.

Here is Eugenie, sporting her engagement ring in her official engagement portrait, if you need a refresher:

Need a closer look? No problem:

Committed to memory? Good. Now, here's a look back at Kate Middleton wearing her engagement ring (which originally belonged to Princess Diana) at her engagement announcement with Prince William in 2010:

And a closer look:

No, they're not identical, of course, but there are some undeniable similarities. They both have colored center stones. Both of those colored center stones are surrounded by halos of diamonds. Both have a flower-like quality that's feminine and whimsical and, yes, very royal-feeling. So, why are their rings so similar? We talked to royal experts and jewelers to find out.

Since Kate has had her ring the longest, this is the first question to address, and the answer is a definitive no.

According to Jamie Samhan, the deputy editor at Royal Central, Eugenie's fiancé, Jack Brooksbank, did have some very specific inspiration in mind when he went to create her engagement ring, but it wasn't Kate's.

"When Jack Brooksbank proposed to Princess Eugenie, he created a ring that was very similar to her mother, Sarah Ferguson, Duchess of York's, ring," Samhan explains.

"If its inspired by a previous royal engagement ring, it's more likely to be the one worn by her mother, which was a red Burmese ruby with a diamond surround," Parker explains. "The pink and red stones are much closer in color than the deep blue stone that originally belonged to Princess Diana."

So why do Princess Eugenie and Kate Middleton's engagement rings look so similar?

Even though Eugenie and Jack didn't set out to copy Kate Middleton's engagement ring specifically, there is a very good reason why the rings look so similar — and it does have to do with a little quasi-copycatting (major emphasis on "little" and "quasi").

The reason Eugenie and Kate's engagement rings look so similar traces all the way back to the 1980s, when Princess Diana chose her ring and, a bit later, when Prince Andrew (Prince Charles' brother and Princess Eugenie's dad) picked out a ring for his then bride-to-be Sarah Ferguson.

"Many people noticed the resemblance to the Duchess of Cambridge's engagement ring, that once belonged to Diana, Princess of Wales," Samhan explains. "The reason that they look very much the same is that Diana's ring was by Garrard & Co in 1981 and Sarah's ring was from the same designer a few short years later in 1986. Prince Andrew did personally design the ring that was given to Fergie, compared to Diana's that was from the collection, but most designers tend to stick to a signature style. So when Jack set out to create a ring for Eugenie just like her mother's, the groundwork that it would also resemble Diana/Kate's ring was already there."

So there was copying in so far as Andrew chose the same jeweler, but since Garrard & Co was the crown jeweler at the time, it was a pretty obvious choice for both brothers.

Here are closeups of Diana's and Fergie's rings, respectively, for comparison:

Is this style of engagement ring just customary for the royal family?

When comparing Eugenie and Kate's engagement rings, it's also important to remember that, since both are royals (or at least royals-by-marriage, in Kate's case), they're going into the engagement game with the same traditions to guide them — and that includes ring design.

"Although Princess Eugenie's engagement ring is reminiscent of Kate's with the large center sapphire and diamond surround, it's a very classic design for a royal engagement ring and not likely an intentional similarity," Parker says.

In a way, Eugenie and Kate's rings are being "copied" on a grand scale. According to American jeweler Shane Co., "more and more brides today are opting for colored center stones or more vintage styles like the royals, with simple gold bands." So there's that.

Where can I buy an engagement ring like Princess Eugenie's or Kate Middleton's?

If you're hoping to hop on the royal-inspired engagement ring trend, you can definitely find similar options out in the real world. Shane Co, for example, sells a Princess Eugenie lookalike ring (which features a 14k yellow gold band and a peach sapphire set in a floral-inspired halo of round diamonds) for $3,720, and a Kate Middleton lookalike ring (which features a 14K white gold band and an oval traditional blue sapphire surrounded by round diamonds) for $2,450.

This content is imported from {embed-name}. You may be able to find the same content in another format, or you may be able to find more information, at their web site.
Kayleigh Roberts Contributor Kayleigh Roberts is the weekend editor at Marie Claire, covering celebrity and entertainment news, from actual royals like Kate Middleton and Meghan Markle to Hollywood royalty, like Katie Holmes and Chrissy Teigen.
This content is created and maintained by a third party, and imported onto this page to help users provide their email addresses. You may be able to find more information about this and similar content at piano.io
Advertisement - Continue Reading Below
More From The Ultimate Guide to the Royal Family
Will Asked His Uncle to Talk to Harry About Meghan
Why the Queen Denied Meghan's Wedding Tiara Pick
Advertisement - Continue Reading Below
Will & Harry's Reactions to Their Parents' Divorce
Harry & Meghan's Drama Won't Be on 'The Crown'
Will's Talk with Charles That Led Him to Kate
The Queen Saved Will from a Breakdown as a Teen
Prince Philip Has "Walked Away" From Prince Harry
Jessica Mulroney Slams Fake Friends on Instagram
Princess Charlene of Monaco's Top Looks
Diana's Note About Her BBC Interview Is Missing