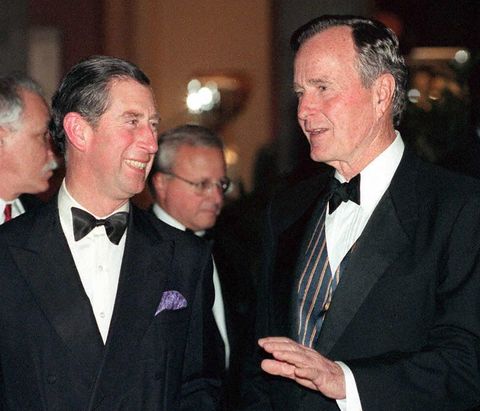 On Friday evening, former President George H.W. Bush passed away at 94 years old. Leaders from all over the world will fly to Washington, D.C. to celebrate his life on December 5, including one major member of the royal family—and it's not the Queen.

In an incredibly rare move, Prince Charles will travel to the States and attend Bush's funeral in place of his mother, Queen Elizabeth II. Clarence House announced the news in the following statement:

"The Prince of Wales will attend the state funeral of former U.S. President George H.W. Bush. The service will take place tomorrow at The National Cathedral in Washington. The Prince will be representing Her Majesty The Queen."

President Bush and the Queen had a special bond when she became the first British monarch to visit Texas in 1991. When he died, she immediately released the following statement on the royal family website:

“It was with sadness that I learned of the death of President George H W Bush last night. President Bush was a great friend and ally of the United Kingdom. He was also a patriot, serving his country with honor and distinction in Office and during the Second World War. Prince Philip and I remember our days in Texas in 1991 with great fondness. My thoughts and prayers are with President Bush’s family and the American people.”

Clearly, the Queen isn't the only royal who has had a close relationship with the Bush's over the years. Prince Charles frequently visited President Bush and former First Lady Barbara Bush with his late ex wife Princess Diana, so it makes sense that Charles would be the one person in the royal family to attend in her place.

The Queen hasn't been back to America since 2007.

Related Story
The Queen Thinks Royal Protocol Is "All Rubbish"
Rachel Epstein Associate Digital Editor Rachel Epstein is the associate editor at Marie Claire, where she covers culture, politics, and lifestyle.
This content is created and maintained by a third party, and imported onto this page to help users provide their email addresses. You may be able to find more information about this and similar content at piano.io
Advertisement - Continue Reading Below
More From The Ultimate Guide to the Royal Family
William Will Suffer "Worst" from Harry's Memoir
Harry's Friends Don't Want to Be in His Memoir
Advertisement - Continue Reading Below
Will & Kate's Modern Approach to Raising George
Why Harry's Memoir Release Date Has Upset People
The Royals Are Worried About Prince Harry's Memoir
Harry Is Putting the Queen in a Difficult Position
Are Will & Kate Sending a Message to Harry & Meg?
Harry and Meghan Reportedly Have a Four-Book Deal
Rare Photos From Diana and Charles' Wedding
Prince George Looks So Grown-Up in New Portrait