At this point, trolling is kind of impossible to avoid on social media, and beyond hitting the "block" button repeatedly, it feels like there's not much anyone can do to respond. Well, not to worry. Outspoken feminist, body-positive advocate, and all-around badass Ariel Winter has your back. Like her Modern Family costar Sarah Hyland, Winter has grown up in the spotlight and has figured out a way to deal with the heckling and nastiness. Winter's no stranger to criticism: She's fended off critics for her entire professional career, and now it's basically a hobby to respond with the most perfect, appropriate, hilarious burn.

For her cute New Year's Eve Instagram photo kissing boyfriend Levi Meaden, she got trolled twice. First, someone dinged her for drinking champagne even though she isn't 21 yet, to which she responded, "I really just held this because I didn't want to be the only one toasting with water...lol." Then the trolls got real cruel, accusing her of dropping weight, "30 ponds [sic]," by doing drugs.

Winter's response was perfect. "Yup...I dropped 30 bodies of water so fast..." she replied. (Spelling corrections for the win!) "My psychiatrist switched me from my previous antidepressant that didn't work and made me gain weight, to coke/meth! Definitely not a new one that worked and then regulated my metabolism." Amazing.

Winter explained to Marie Claire in 2016 that it's impossible to avoid the trolls, no matter what she does. "I got hate when I was 11 and super flat and very skinny, and then when my body changed and I got older, it was a whole new thing," she explained. "I was called trashy, ugly, fat, and a slut...everything possible."

"Once I started speaking out about it, I did find that there was a whole community of negative people that followed me and started attacking me, but I also found that a lot of really incredible people started following me and being inspired," she said. "They were doing the same thing that I was and fighting back in a positive way at the people that were hating."

So there you have it. Find a good community of supporters, and beat the trolls at their own game. I'm definitely going to borrow Winter's techniques for 2019. 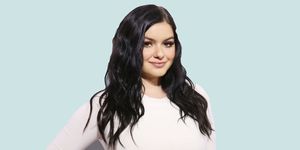