We are mere weeks away from welcoming the royal baby, the genetic melding of Prince Harry and Meghan Markle's glorious DNA, and everyone has lost all patience. To fill the long, long days and weeks we have left until its arrival, people are speculating about everything from the baby's sex to the statistical likelihood of potential names Harry and Meghan could choose. And, close, personal anonymous sources allegedly connected to the royal couple are offering up little insider insights.

Last week, Vanity Fair reported on one of these insider tidbits, from a friend of Meghan's who said that the former actress planned to raise her child in a gender neutral way:

Now, in a rare move, Kensington Palace has officially rebutted claims that the Harry and Meghan's firstborn will be raised gender fluid, according to The Sun. "This story is totally false," the Palace reportedly said, according to the British paper.

So, at least that's one royal baby rumor we can stop obsessing about? 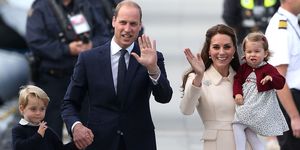 Things to Know About Royal Babies
Kayleigh Roberts Contributor Kayleigh Roberts is the weekend editor at Marie Claire, covering celebrity and entertainment news, from actual royals like Kate Middleton and Meghan Markle to Hollywood royalty, like Katie Holmes and Chrissy Teigen.
This content is created and maintained by a third party, and imported onto this page to help users provide their email addresses. You may be able to find more information about this and similar content at piano.io
Advertisement - Continue Reading Below
More From The Ultimate Guide to the Royal Family
Will Asked His Uncle to Talk to Harry About Meghan
Why the Queen Denied Meghan's Wedding Tiara Pick
Advertisement - Continue Reading Below
Will & Harry's Reactions to Their Parents' Divorce
Harry & Meghan's Drama Won't Be on 'The Crown'
Will's Talk with Charles That Led Him to Kate
The Queen Saved Will from a Breakdown as a Teen
Prince Philip Has "Walked Away" From Prince Harry
Jessica Mulroney Slams Fake Friends on Instagram
Princess Charlene of Monaco's Top Looks
Diana's Note About Her BBC Interview Is Missing