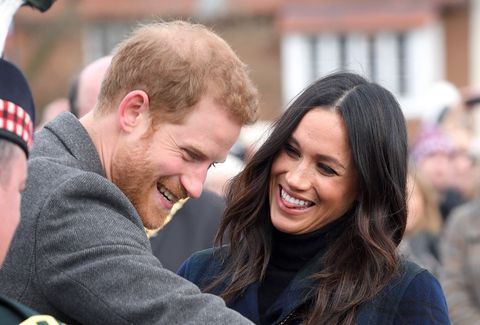 It’s been a few hours since Meghan Markle and Prince Harry announced that they’re having their first child, so naturally it’s time to think about what’s really important: How much money can be made off of guessing Meghan and Harry's baby’s name correctly.

Yes, no sooner had the news reached our fair shores than bookies started sharing the spread (that’s a gambling thing, right?) of which baby names had the highest odds of getting picked by the royal couple, who announced that they were expecting just a few days shy of the five-month wedding anniversary.

I guess it still feels a little early to guess on what they'll name the royal baby, given that we just found out Meghan is pregnant, like, four hours ago, but what do I know? Maybe you’re feeling especially lucky.

So which names are likely to bank you the big bucks? Here's one official estimate:

Um, something tells me that 1-100 odds of “Samantha” being chosen is a little generous. What else we got?

I have already received a press release from bookies on the name of Prince Harry and Meghan Markle’s fetus and though Diana is of course an obvious suggestion it still elicited insta tears for me, phew #RoyalBaby pic.twitter.com/yiJy69tXJ9

These ones seem a little bit more likely, if we're being honest. If I were a betting person (I'm not), my money would be on Diana, though Charles or Edward for a boy are classics, too.

Oh, oh, if Meghan and Harry go with Henry they can call him Hank for short! Prince Hank!

Related Stories
Harry and Meghan Have Arrived in Australia
All The Clues Meghan Markle Really Was Pregnant
Cady Drell Culture Editor Cady is the Culture and News Editor for MarieClaire.com, as well as a noted Timothée Chalamet enthusiast.
Advertisement - Continue Reading Below
More From The Ultimate Guide to the Royal Family
Megan and Harry Won't Use "Sussex Royal"
Harry & Meghan Are Looking at a Mansion in Malibu
Advertisement - Continue Reading Below
Kate Middleton's $12 Earrings Have Been Restocked
A Look at Royal Family Portraits Through the Years
Royals Share Rare Look Into Palace Refurbishment
Margot Robbie Invites Meghan & Harry to Dinner
The Royals' Website Accidentally Linked to Porn
Kate Says Will Felt Helpless During Pregnancies
Kate Shares Never-Before-Seen Picture of Charlotte
Meghan Markle and Prince Harry Pictured Together