What do Reddit addicts and Game of Thrones actors have in common? They both spent a lot of time desperately trying to guess what would happen in the show's final season—the actors just happened to find out what actually happens sooner than the Redditors.

During a recent interview, Maisie Williams, who plays badass assassin Arya Stark on the HBO hit, admitted that she and her mom took a semi-formalized crack at predicting the show's final season before she got the scripts—and that it didn't go super well.

Maisie wasn't the only cast member who was excited to see how the series ended. Joe Dempsie, who plays Robert Baratheon's bastard son, Gendry, was as excited as fans to find out what role his character will play in the final confrontation.

"At the top of every script there is a cast list for every character involved in that episode. A few of us were tempted to check if we were in the last one," he said. "Look, Gendry's the last surviving blood Baratheon. He's got to have a pretty strong claim. But I don't even trust the fact that I have the answers in my brain. It feels like you're walking around with a secret that the whole world wants to know."

Now, obviously, Maisie and Joe both know how the series ends. The rest of us have to wait until it returns on April 14 to learn anything at all. 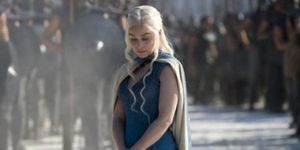 Take the Official Game of Thrones Quiz
The Craziest 'Game of Thrones' Fan Theories
Kayleigh Roberts Contributor Kayleigh Roberts is the weekend editor at Marie Claire, covering celebrity and entertainment news, from actual royals like Kate Middleton and Meghan Markle to Hollywood royalty, like Katie Holmes and Chrissy Teigen.
This content is created and maintained by a third party, and imported onto this page to help users provide their email addresses. You may be able to find more information about this and similar content at piano.io
Advertisement - Continue Reading Below
More From Celebrity
Bennifer Recreated Their 2002 PDA Moment
Why Harry's Memoir Release Date Has Upset People
Advertisement - Continue Reading Below
The Royals Are Worried About Prince Harry's Memoir
Gabrielle Union Debuted a New, Short Haircut
J.Lo Made Out With Ben on IG for Her 52nd Birthday
Harry Is Putting the Queen in a Difficult Position
Are Will & Kate Sending a Message to Harry & Meg?
Harry and Meghan Reportedly Have a Four-Book Deal
Naomi Osaka Lit the Olympic Cauldron in Tokyo
John Legend Performed "Imagine" for the Olympics