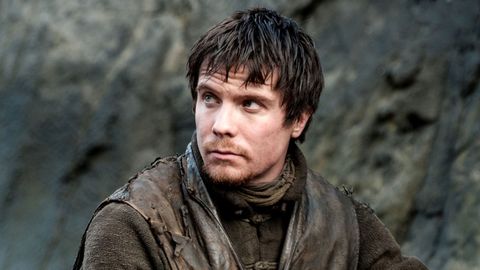 Game of Thrones Season 7 has been all about tying up loose ends. Earlier this season, the show finally addressed what happened to Arya Stark's direwolf, Nymeria. Tonight, another lingering GOT mystery was solved: The fate of Gendry.

When we last saw Gendry, he was rowing off into the night, presumably headed for King's Landing, but honestly, he was never mentioned again so his fate was basically ¯\_(ツ)_/¯.

This week, Davos (the character who helped Gendry escape from Stanis and Melisandre way back in Season 3) went back to King's Landing to retrieve him. He even made the joke all fans have been thinking—that he wasn't sure if Gendry ever made it or if he was just still rowing.

But no, Gendry made it and he's basically just been waiting in Fleabottom, making weapons for the Lannisters and biding his time until Davos (or anyone, really) called upon him to help do literally anything else. The guy had a go-bag and a death hammer waiting and ready to go.

Davos warned him not to reveal his parentage (he's Robert Baratheon's last living bastard), but he did exactly that, immediately and purposefully, upon meeting Jon Snow. Gendry doesn't want to sit around forging swords; he wants in on the action (and he gets his wish—Jon takes him on the mission to the North to capture a wight to prove the existence of the Army of the Dead to Daenerys and Cersei).

However, since Gendry is an expert blacksmith and, if that mission beyond the wall is successful, Jon's army will need as many dragonglass weapons as possible, he might just end up forging weapons after all.