Today's Top Stories
1
Yara Shahidi Plays Pop Quiz With Marie Claire
2
Tarana Burke on the Past and Future of #MeToo
3
The Most Jaw-Dropping Fashion From the Met Gala
4
Is Olive Oil the Key to Ridiculously Good Skin?
5
How to Get a New Job in a Virtual World
Jon KopaloffGetty Images

Is this tweet Ashton Kutcher's response to Demi Moore's allegations that he repeatedly cheated on her? For context: Moore released her memoir, Inside Out, on Monday, in which she gets pretty candid about her relationship with Kutcher before their divorce. Among the revelations were her claims that Kutcher cheated on her multiple times, before deciding he "didn't want to work on [their] marriage." And the same day, Kutcher tweeted that he had a "pretty snarky tweet" ready to go, but binned it after looking at his wife, Mila Kunis, and their two children. "Then I saw my son, daughter, and wife and I deleted it," Kutcher wrote. Was that deleted tweet about Moore?

As Entertainment Tonight reports, Moore didn't hold back in her autobiography when it came to her former husband, saying that he "admitted it right away" after cheating for a second time. Her marriage to Kutcher also compromised her relationship with former husband Bruce Willis and their three children, she said.

"The husband who I'd thought was the love of my life had cheated on me and then decided he didn't want to work on our marriage. My children weren't speaking to me... Their father—a friend I'd counted on for years—was gone from my life," Moore wrote, according to Entertainment Tonight.

I was about to push the button on a really snarky tweet. Then I saw my son, daughter, and wife and I deleted it. ❤️

"The career I'd scrambled to create since I moved out of my mother's apartment when I was sixteen years old was stalled, or maybe it was over for good," she continued. "Everything I was attached to—even my health—had abandoned me. I was getting blinding headaches and losing weight scarily fast. I looked like I felt: destroyed."

Moore also wrote about her traumatic childhood, including being raped as a teenager and the PTSD and other mental health issues she struggled with afterwards. "For decades, I didn’t even think of it as rape. I thought of it as something I caused, something I felt obligated to do because this man expected it from me," she wrote.

She also discussed witnessing her mother's suicide attempts as a child, writing, "I remember using my fingers, the small fingers of a child, to dig the pills my mother had tried to swallow out of her mouth while my father held it open and told me what to do." Moore's suffered trauma nobody should have to experience; let's hope she's in a happier, healthier place today. 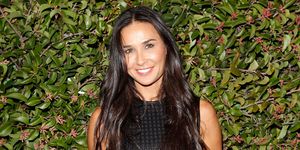 Demi Moore Is Selling Her $75 Million "Unicorn" Apartment
Emily Dixon Emily Dixon is a British journalist who’s contributed to CNN, Teen Vogue, Time, Glamour, The Guardian, Wonderland, The Big Roundtable, Bust, and more, on everything from mental health to fashion to political activism to feminist zine collectives.
This content is created and maintained by a third party, and imported onto this page to help users provide their email addresses. You may be able to find more information about this and similar content at piano.io
Advertisement - Continue Reading Below
More From Celebrity
Prince Charles Shares Final Exchange With Philip
William and Kate's Children Just Love Airplanes
Advertisement - Continue Reading Below
Jennifer Aniston Answered Bizarre Fan Questions
Prince Charles "Really Wants to Meet" Lilibet
Britney Spears Deleted Her Instagram Account
Megan Fox Won't Be Told "What a Woman Should Be"
Jennifer Garner Shared an Emotional Message on IG
Travis Scott Discussed His Parenting Style
Kanye West Unfollowed Kim Kardashian on Instagram
Kate Hudson Is Engaged to Danny Fujikawa