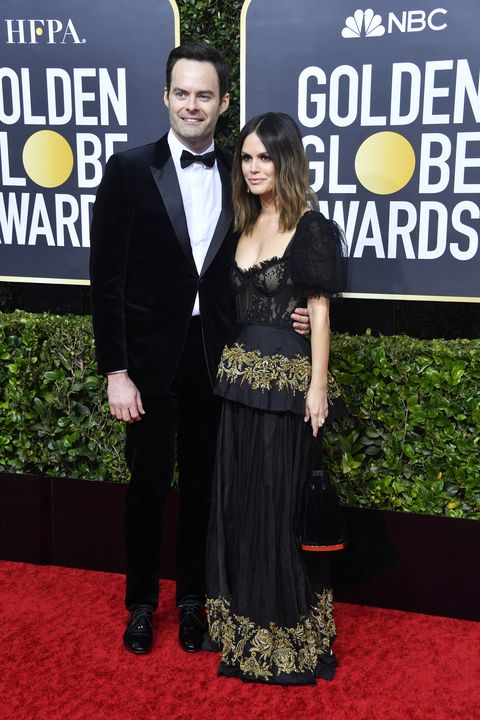 THIS IS NOT A DRILL: Rachel Bilson and Bill Hader are officially dating! The couple (!!!) just made their debut as a COUPLE (!!!!!) on the Golden Globes red carpet. The pair have been fueling dating rumors for a few weeks now: They were first spotted grabbing coffee in Hader's hometown of Tulsa, Oklahoma, and were most recently photographed grocery shopping together in Los Angeles on New Year's Eve. But their Golden Globes appearance is the first official confirmation we've received of their relationship status.

Hader is nominated for a Golden Globe award for Best Actor – Television Series Musical or Comedy for his role in HBO's Barry. Ahead of their red carpet appearance, Bilson's makeup artist shared a very sweet photo of the couple and some behind-the-scenes photos of the OC actress's beauty look, writing: "And they're off to the Globes! The cutest couple ever @rachelbilson and #billhader! ❤️ Rachel's hair by @davynewkirk, styled by @nicolechavezstyle and makeup by me! Breakdown coming soon! #goldenglobes #rachelbilson"

Hader and Bilson starred in The To Do List in 2013 together. Hader split from his wife, Maggie Carey in 2017; they share three daughters together, Hannah, 10, Harper, 7, and Hayley, 5. Bilson was last linked to Nick Viall (yes, The Bachelor/Bachelorette's Nick Viall), and shares a daughter, Briar Rose, 5, with ex Hayden Christensen.

For the big moment, Hader chose a classic tux and Bilson wore a gorgeous Brock Collection gown with a lacy, lingerie-inspired bodice and skirt with delicate gold embroidery. The new couple (!!!) looked fab.