Today's Top Stories
1
America Is Crushing on My Boyfriend Andrew Cuomo
2
Vanessa Carlton Lives in the Now
3
Fashion Comes Together to Fight Coronavirus
4
Julia Louis-Dreyfus Has All the, Uh, Right Answers
5
How to Build a Mini Gym at Home
Morgan McMullenGetty Images

Turns out that even when Gwyneth Paltrow jokes about her vagina, it makes money. The Goop founder sat down with Jimmy Kimmel on Monday, February 24, and shared the backstory behind the “This Smells Like My Vagina” candle that went wildly viral after debuting earlier this year.

Paltrow revealed that the unique scent came about when she was collaborating with Douglas Little, the perfumer behind the Heretic Parfum label.

“One day, we were smelling different fragrances, and I was joking around, and I smelled something and I said this, as a joke,” The Politician star said, referencing the candle's now-iconic name. “But then, I was like wouldn’t that be cool if somebody actually had the guts to do that. What a punk rock feminist statement to have that on your table."

Little made the candle, baring the cheeky moniker, a reality—which Paltrow first assumed to be a joke. "The next thing I knew, it was on my website,” she revealed.

The late night host did ask if the team at Goop verified the scent, but Paltrow assured that the candle won't make your home smell like a gynecologist's office.

“It smells nice, it smells a little bit masculine, really,” Kimmel said, to which the entrepreneur responded, “Well its not really supposed to smell like a vagina. I think a lot of women have grown up with a certain degree of shame or embarrassment around this part, so we are kind of like ‘Yo!'”

PSA: It's back in stock. Tap to shop.

Goop's website describes the product as containing notes of “geranium, citrusy bergamot, and cedar absolutes juxtaposed with Damask rose and ambrette seed" and suggests it will put you “in mind of fantasy, seduction, and a sophisticated warmth.”

The $75 home decor item instantly sold out when it dropped (thanks, in part, to Elton John buying the candle in bulk). But Paltrow announced on Monday that it's now back in stock. So run, don't walk—and don't hold your breath for a male-version of the candle that smells like balls. 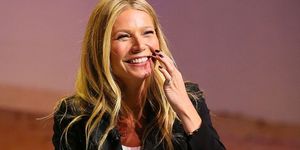