It may feel simultaneously like yesterday and one million years ago, but cast your mind back, if you can, to March, when Gal Gadot shared a video on Instagram that caused something of a stir online. As quarantine measures were implemented around the world due to the COVID-19 pandemic, Gadot organized her celebrity friends for a singalong of John Lennon's "Imagine," posting the result on Instagram with the caption, "We are in this together, we will get through it together. Let’s imagine together. Sing with us." A-listers including Kristen Wiig, Mark Ruffalo, Natalie Portman, Zoë Kravitz, and Cara Delevingne all took part.

The video didn't go down quite as well as Gadot hoped, with the New York Times blasting its "horribleness" and "smug self-satisfaction." In a new interview with Vanity Fair, Gadot responded to the backlash, and explained the intention behind the video. "Sometimes, you know, you try and do a good deed and it’s just not the right good deed," she said. "I had nothing but good intentions and it came from the best place, and I just wanted to send light and love to the world."

"I started with a few friends, and then I spoke to Kristen [Wiig]," she continued. "Everyone loves her, and she brought a bunch of people to the game." Gadot's summary: "But yeah, I started it, and I can only say that I meant to do something good and pure, and it didn’t transcend." 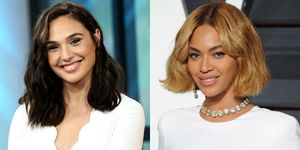 Gal Gadot Says Beyoncé Helped Her Get Wonder Woman
Emily Dixon Emily Dixon is a British journalist who’s contributed to CNN, Teen Vogue, Time, Glamour, The Guardian, Wonderland, The Big Roundtable, Bust, and more, on everything from mental health to fashion to political activism to feminist zine collectives.
This content is created and maintained by a third party, and imported onto this page to help users provide their email addresses. You may be able to find more information about this and similar content at piano.io
Advertisement - Continue Reading Below
More From Celebrity
Chrissy Teigen Shared a Sweet Video With Luna
EmRata Displayed Her Bump in an Open Button-Down
Advertisement - Continue Reading Below
Harry Sent a Legal Warning Over "False" Article
Chrissy Teigen Talked About Her Baby Loss Photos
Chrissy Teigen Opens Up About Her Loss
A Look Back at Gwen Stefani & Blake Shelton's Love
Serena Williams Shows Off Toned Body In BTS Photos
See a Romantic New Photo from Beatrice's Wedding
Harry Was Treated as a "Spare" by the Royals
Cardi B Called Out Racist Reactions to Her Birkins