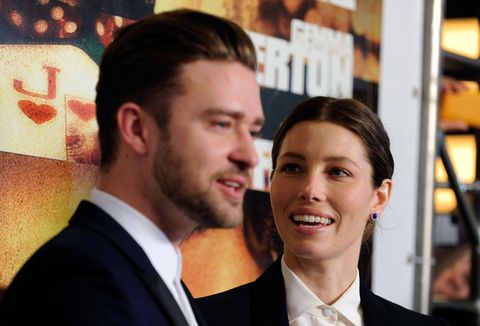 Update, 9/10: Justin Timberlake and Jessica Biel had a baby in April, but sometimes you forget because you're not constantly bombarded with pictures of Silas like you are some other celeb kin. (Good thing.) Which is why Jimmy Fallon's latest twitter post is so special:

Do you see those eyes? Those lips?! That FACE? #ModelBabyStatus

Update, 4/20: Justin Timberlake didn't wait too long to debut his son Silas to the world, uploading a pic to Instagram that'll make your heart explode. The tiny baby is seen wearing a jersey, supporting his team the Memphis Grizzlies: "The Timberlakes are ready!!! GO GRIZZ! #GritNGrind #Playoffs #BabyGrizzROAR."

Update, 4/11: Jessica Biel and Justin Timberlake have just welcomed their first baby, People reports. And despite the previously-gossiped rumors that it'd be a girl, the new Timberbaby is a boy, and we already even know his name: Silas Randall. Cute. Also, according to some dubious internet astrology research, people born on April 11 are open-minded idealists, which, based on the gene pool he's workin', makes total sense. Congrats to the new mom and dad!

Update, 1/22: Where would we be without loose-lipped friends of celebrities? One such gossipy unnamed source reports Jessica Biel and Justin Timberlake are expecting a "little princess" in the spring, according to Life & Style. Other details: She'll be holding court in a frill-free, jungle-themed nursery and going on royal play-dates with Mila Kunis and Ashton Kutcher's daughter.We're not expecting pics given how private both couples are,but it's enough just to imagine how cute that would be.

Update, 12/16: Timberlake's former NSYNC bandmate, Joey Fatone, has confirmed to InTouch that the couple is expecting their first baby: "He told me a while ago, and I kept my mouth shut. But now I can talk about it!"

This will be the first baby for both Biel and Justin Timberlake, who just celebrated their two-year wedding anniversary in October while on vacation in New Zealand. A source close to Biel revealed that she is reportedly due in April 2015.

With genetic blessings of parents like these, this kid is sure to do great things—or at least be awfully cute.

Update 11/5: Still no statement from either star's representatives, but multiple sources have confirmed to Us Weekly Biel is pregnant. "Right now they are just enjoying the news for themselves," one said. "They just want a happy baby." We're hoping it won't be long before we can celebrate officially.

Original post, 10/29:Black is always the new black, but so too, apparently, are infants: Following a string of celebrity birth and pregnancy announcements, Jessica Biel and Justin Timberlake are reportedly expecting a baby of their own!

According to Radar Online, "after weeks of feverish speculation and baby bump sightings," the 32-year-old actress could be really, truly pregnant—and "at least three months" so.

If what the unnamed "pal close to the 7th Heaven star" says is indeed true—and we will update when the news has been confirmed—this will be the first child for Biel and Timberlake, who celebrated their second wedding anniversary Oct. 19. For now, we wish the couple a cautious "congratulations."

Mila Kunis and Ashton Kutcher Release the First Pics of Their Baby, Prove They Have Top-Notch Genes