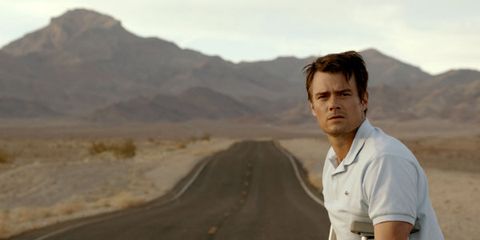 Best known for playing the heartthrob in romantic comedies (Life As We Know It, Safe Haven) and the captain in the uber successful sci-fi thriller Transformers franchise, Josh Duhamel's new film Scenic Route is a box office road less traveled. And a literal one for the film as Scenic Route finds its two (and pretty much only) main characters stranded on the side of a deserted road partway into a roadtrip. A trip, which was intended to be a reconnection between two old friends that had drifted apart (Dan Fogler starring opposite JD), evolves into a violent struggle of survival against the elements and each other.

Marie Claire: This movie is such a diversion from the roles we've seen you play in the past. What made you want to do this?

Josh Duhamel: "It was a chance to do something that I'd always wanted to do. It's the reason why I got into this business, to make a movie like this. I'm very proud with the way it turned out — nobody would expect it. They expect me to be playing with the baby or trying to gain the love of a girl. This [Scenic Route] was not that."

JD: "At one point the film witnesses Mitchell confessing how he no longer found his wife attractive, how pregnancy had changed her body – I wished that scene had been cut. I was like, 'do we really need to say this?' But they [the directors, Kevin and Michael Goetz] wanted to keep it in there because it felt like it was the brutal truth. And these guys were being totally honest with each other and I guess that's just the way he [Mitchell] felt."

MC: Speaking of kids — you're about to become a first time dad! (Josh is married to Black Eyed Peas' frontwoman Fergie!). What's been your experience through it all?

JD: "I didn't know if it'd be 9 months of misery or if she was going to be okay with it all but she's handled it so well. It's been really, really fun to watch."

JD: "Ya, she's been in great spirits throughout the whole thing. It's the best. It's only made us that much closer."

MC: You've still managed a weekend or two away with the boys though. We've been hearing about these infamous weekends of games and debauchery. In fact you just had one (a last pre-baby hoorah perhaps?) What's the story behind these?

JD: "We call it the "Buddy Games," my friend does them every year. It involves go-cart racing, golf, darts, shuffleboard, basketball, all kinds of different games. And there are prizes! I've had a very close group of friends for a long time; it's just nice to keep everybody connected.

MC: Do you think the laws on these weekends will change once your son is in the picture?

JD: I would imagine these kinds of things happen less frequently when kids are involved. I actually can't believe my friend's wife let him do it. He just built the place too. I was like 'you're really going to let twenty stinky dudes inhabit your home for four days?'"

Well perhaps Fergie will be just as cool about it once you're a dad too (something tells us she will be!).


Make sure to catch the film this Friday, August 23rd at theaters or see it on Video on Demand.