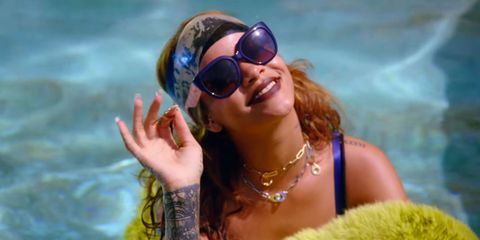 Earlier this summer, Rihanna released the music video to accompany her provocative single "Bitch Better Have My Money." It is NSFW, to say the least. More like a twisted Tarantino mini-movie than a normal music video, the seven-minute film features a range of explicit themes, from murder and torture to drugs and nudity.

Not least shocking of all is the scene in which an innocent woman is kidnapped and tortured by hanging her naked and upside down, bound by rope and swinging from the ceiling of an abandoned warehouse. She's the unfortunate wife of the accountant who screwed over Rihanna and took her money, which somehow means she is fair game for RiRi's retribution in the storyline of the song.

Needless to say, the gruesome content caused an instant internet craze, including significant criticism that pegged it as anti-feminist for its abusive behavior and misallocated violence towards the wife of the villain character. Now, in an interview with NME, Rihanna is finally responding to the BBHMM backlash—though it seems she may not even understand just how much controversy the video created.

"I was very happy with the reaction," Rihanna told NME. "Very happy."

Upon realizing she didn't understand what the initial question was getting at, the interviewer laid it a bit more plainly: "What, then, does does she think of observations that the video—in which Rihanna and friends torture a naked woman to punish her fully-clothed husband—is anti-feminist?"

To which the singer reportedly responded with an emphatic eye roll, "Well I mean now we're reaching. I didn't think about anything that had to do with that. Wow. And at the end of the day the women won. The bitch was the man. So I'm confused."Those are the people that didn't get it. I'm not worried about those people. This was not a woman empowerment video. I was making a piece of art."

The always-rebellious Rihanna has never played it safe or shied from shock-and-awe subject matter, but in this day and age its nearly impossible to create an artistic work that isn't scrutinized under the cultural lens of our time.

"I just have a way of breaking the rules even when I don't intend to," the singer rationalized. "You have to let people be who they are – you have to believe that that's going to be the best version of them."

So the question that remains is, should videos like "Bitch Better Have My Money" (or even Taylor Swift's "Wildest Dreams") be held to a certain standard of ethical responsibility based on their content as it is perceived by viewers or the intended effect and message of the artist?

This content is imported from YouTube. You may be able to find the same content in another format, or you may be able to find more information, at their web site.
Sarah Lindig Senior Digital Editor, Special Projects Sarah Lindig is the senior digital editor, overseeing special projects for Harper's Bazaar.
This content is created and maintained by a third party, and imported onto this page to help users provide their email addresses. You may be able to find more information about this and similar content at piano.io
Advertisement - Continue Reading Below
More From Music
Princess Diana's Butler Talks 'The Crown'
Reese & Ryan's Son, Deacon, Drops His First Single
Advertisement - Continue Reading Below
Life Advice From an Icon, Cher
J.Lo Is Basically Naked on Her New Single Cover
Karaoke Songs Anyone (Yes, Anyone) Can Rock
Um, This Dude Claims Lady Gaga Stole “Shallow”
Sad Taylor Swift Is the Best Taylor Swift
Jennifer Lopez's NYC Concert Was Evacuated
Miley Cyrus Channels Britney Spears' Iconic Look
Ginger Spice Apologizes for Leaving Spice Girls