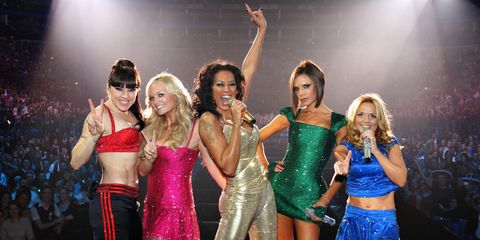 Prepare to have your hearts broken into a zillion pieces—Victoria Beckham has just revealed that the Spice Girls won't be touring after all.

The rumors began last week when the group started sharing photos on Instagram, which showed they'd all been hanging out together again:

Following the impromptu reunion, TMZ reported that the Spice Girls had met to plan "a world tour that will kick off in late summer" 2018. However, Victoria Beckham herself just shot down those rumors.

Speaking during a during a preview of her Autumn Winter 2018 collection at New York Fashion Week, Beckham said (via E! News), "I’m not going on tour. The girls aren’t going on tour." If you're crying, then you're most definitely not alone.

And while their meeting was productive, there's apparently no clear route forward for the Spice Girls, as Beckham further revealed, "There’s something so strong in the message of what the Spice Girls stood for. What is that in the future? What does that look like? We were just bouncing ideas around. Brainstorming."

While the group's "brainstorming" sadly didn't include plans for a worldwide tour, it's hopefully a sign that the five women will be working together again in some capacity in the not too distant future.