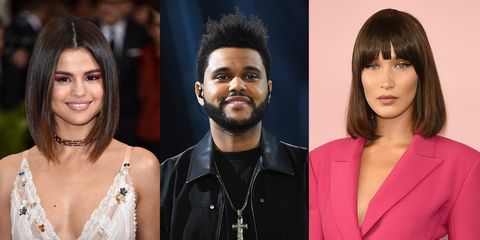 Having dated two of the world's most successful women, The Weeknd has some stories to tell. And it looks like he's finally revealing details about both of his ex-girlfriends on his new EP, My Dear Melancholy,.

Related Story
Bella Hadid and The Weeknd Are Hanging Again

The Weeknd dated Hadid between 2015 and the end of 2016, while reports of his very public relationship with Gomez started in January 2017, with the couple announcing their break-up in October 2017.

Reports that Hadid and The Weeknd were hanging out again following his split from Gomez were short lived, but My Dear Melancholy, has more than one reference to the model. It definitely sounds as though the singer is ready for a reunion.

Here are some of the references to Hadid and Gomez on The Weeknd's new album:

The Weeknd sings about the end of a relationship in "Privilege," and it could easily be about Gomez. He sings, "And I don't wanna hear that you are suffering/ You are suffering no more," which could refer to the lifesaving kidney transplant surgery she underwent, due to having lupus.

He also seems to reference the intense media speculation surrounding their relationship when he sings, "They said our love is just a game, I don't care what they say."

Another song that seems to be about Gomez, starts with the heartbreaking lyrics, "What makes a grown man wanna cry?" Towards the end of the song, The Weeknd speaks about a lover that chose "something toxic" over their relationship. Could he be referring to Gomez going back to her ex, Justin Bieber? Of course, Gomez was spotted hanging out with Bieber before her break-up with The Weeknd was even announced.

A telling reference in "Wasted Times" is when The Weeknd sings, "You were equestrian, so ride it like a champion." Hadid is well known for her love of horses, so it's extremely likely that this song is all about her.

As for the "Wasted Times" in the song's title, The Weeknd seems to be referencing his relationship with Gomez, and how he can't forget Hadid:

This song is totally heartbreaking, and almost certainly about Gomez. The Weeknd starts by singing, "We found each other/ I helped you out of a broken place/ You gave me comfort/ But falling for you was my mistake."

As for when Gomez seemingly went back to Bieber, The Weeknd has some thoughts:

I said I didn't feel nothing, baby, but I lied/ I almost cut a piece of myself for your life/ Guess I was just another pit stop/ 'Til you made up your mind/ You just wasted my time.

And is The Weeknd suggesting that he would've donated a kidney to Gomez, when he says he "almost cut a piece of myself for your life"?

The songs on My Dear Melancholy, are so revealing, and definitely require further examination.