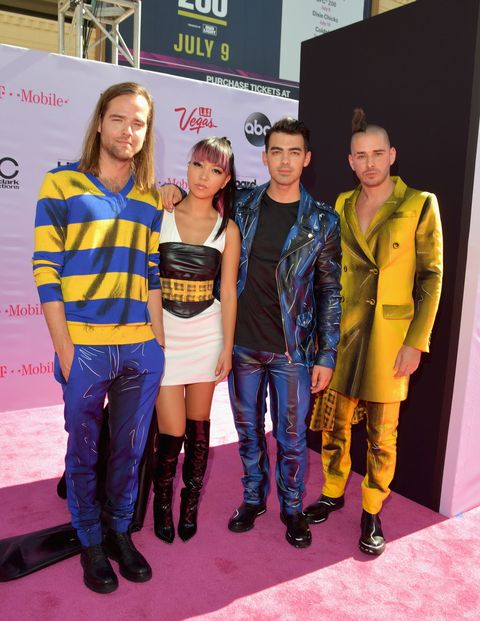 Your best Jo Bro bae Joe Jonas is in a cool new band, DNCE, and they have a cool new single out called "Cake by the Ocean." It's very good and very catchy, even if Joe says the F-word and you probably weren't ready for that? (I know I wasn't.) The titular lyrics also doesn't make much sense, really, because who would take cake with them to the beach?! You'd get sand stuck all over the fondant, for example, and that would ruin everything.

But as it turns out, the song isn't supposed to be taken literally. Instead, "cake by the ocean" is a phrase that got lost in translation in the studio — "Working on the record, these Swedish producers that we were working with kept confusing 'sex on the beach' with 'cake by the ocean,' Joe told MTV. "Then, it became this kind of lyrically wacky song, and it kind of embodies the band. It's funky, it's fresh, I think it's something that people can dance to." Joe did not clarify whether "sex on the beach" was originally supposed to refer to the cocktail or, you know, actual sex on the beach (again, sand, yuck) but considering there's all sorts of lyrics about "licking frosting" and "living dangerously," it's probably the latter.

In conclusion, these words to live by as the song fades out: "Red velvet, vanilla, chocolate in my life. Confetti, I'm ready; I need it every night." Sexy inferences aside, this is the truth.

Alex Rees Deputy Editor of News I’m the news director here at Cosmopolitan.com, and I could really use a cup of tea right now.
This content is created and maintained by a third party, and imported onto this page to help users provide their email addresses. You may be able to find more information about this and similar content at piano.io
Advertisement - Continue Reading Below
More From Music
Princess Diana's Butler Talks 'The Crown'
Reese & Ryan's Son, Deacon, Drops His First Single
Advertisement - Continue Reading Below
Life Advice From an Icon, Cher
J.Lo Is Basically Naked on Her New Single Cover
Karaoke Songs Anyone (Yes, Anyone) Can Rock
Um, This Dude Claims Lady Gaga Stole “Shallow”
Sad Taylor Swift Is the Best Taylor Swift
Jennifer Lopez's NYC Concert Was Evacuated
Miley Cyrus Channels Britney Spears' Iconic Look
Ginger Spice Apologizes for Leaving Spice Girls