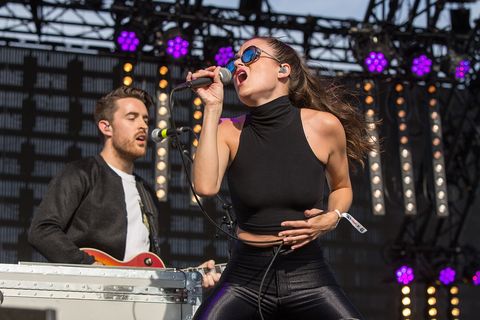 If you're missing Bonnaroo this weekend, or if you've never even been to Bonnaroo (😒), don't sweat it—we've hooked you up.

Indie-pop band Cardiknox (AKA Lonnie Angle and Thomas Dutton), who released their '80s-inspired debut album Portrait earlier this year, want to be your personal tour guides to the 'Roo on Saturday. This is the band's first time playing the festival, so you'll get to feel their freshmen excitement for yourselves.

Tune in to Marie Claire's Snapchat (@marieclaire) around 3 p.m. EST on Saturday to see moments from the Knocks set, the Oh Wonder set, followed by Haim, and then Macklemore. The Cardiknox thesmelves will take the stage around 12:30 a.m.—so plan accordingly, because it's going to be a late night.

Food for thought: Your friends won't mind if you're glued to your phone this weekend if you're *simultaneously* playing them really cool jams. You know?