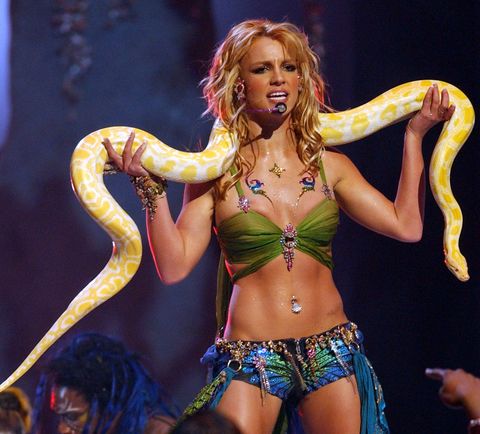 Britney Spears has been a pop icon for almost 20 years now, but that doesn't mean she doesn't still get nervous before certain performances. According to E! Online, her highly-anticipated "comeback" performance (it will be her first in almost 10 years) at the MTV Video Music Awards has her a little on edge.

But, Spears says, that's nothing new. Performing at the VMAs has always made her nervous, she told Cubby and Carolina in the Morning.

"I think there's something in the air with the VMAs," she said. "It's like electric. I can't really explain it."

Even though this will be her sixth time performing at the VMAs, something about the energy of the show still gets her nerves going.

"Every time I've performed there it's always been one of those really big, nerve-racking experiences and the people that come, those celebrities, are so much fun and different... I still get very nervous," Spears said.

Of course, maybe that has something to do with how epic her VMA performances have been. In the past, Spears has toted around a giant snake, done a striptease, and made out with Madonna, all in the name of a good VMA show.

Not much is known about her plans for tonight's show, but we do know it will include the first-ever televised performance of her new single "Make Me..." featuring G-Eazy, from her new album, Glory.