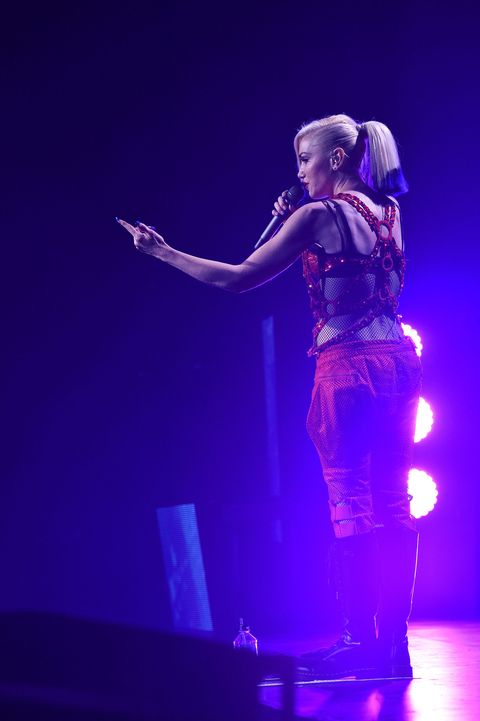 Gwen Stefani has been the queen of the breakup anthem ever since "Don't Speak." And now, years later, she has a new tear-jerking song about lost love.

Just a few months after she and husband Gavin Rossdale announced they were divorcing, Stefani premiered her new single, "Used to Love You," at New York City's Hammerstein Ballroom over the weekend. According to Paper, she gave a speech before the song, saying that it was personal and that she felt she needed to share it with the crowd. She sang the ballad in front of a video of herself on the verge of tears.

The lyrics are raw and emotional, and it's not hard to make the connection to Rossdale. "I don't know why I cry / But I think it's 'cause I remember for the first time since I hated you / That I used to love you" is a doozy, and so is "You know I was the best thing that ever happened to you / Now look at what you lost." Rolling Stone notes that the lyric "Nobody taught you how to love" is similar to a 2012 No Doubt Song, in which she sings, "Who taught you how to love?" Oof.

The single will reportedly be released later this week, but until then, grab some Ben & Jerry's and watch Stefani's performance below.

This content is created and maintained by a third party, and imported onto this page to help users provide their email addresses. You may be able to find more information about this and similar content at piano.io
Advertisement - Continue Reading Below
More From Music
Reese & Ryan's Son, Deacon, Drops His First Single
Life Advice From an Icon, Cher
Advertisement - Continue Reading Below
J.Lo Is Basically Naked on Her New Single Cover
Karaoke Songs Anyone (Yes, Anyone) Can Rock
Um, This Dude Claims Lady Gaga Stole “Shallow”
Sad Taylor Swift Is the Best Taylor Swift
Jennifer Lopez's NYC Concert Was Evacuated
Miley Cyrus Channels Britney Spears' Iconic Look
Ginger Spice Apologizes for Leaving Spice Girls
Fans Walked Out of the Spice Girl's Reunions Tour