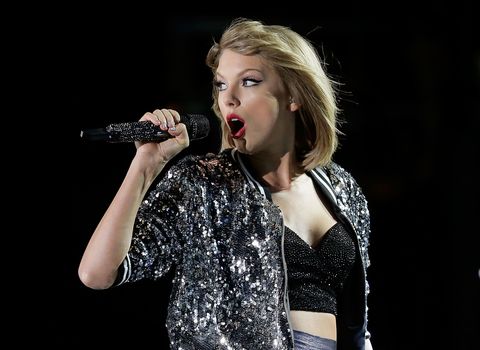 If still haven't heard Taylor Swift's new single, "Look What You Made Me Do," first, crawl out from the rock you're living under, and then listen below to join the cultural conversation, because it's a full-on conversation.

Here's what critics have to say about the divisive single.

"Pop music is never not repetitive, but Swift's repetitions, for the first time ever in her career, sound wearying instead of catchy. She talks about a revenge list, then talks again about revenge: 'Maybe I got mine, but you'll all get yours.' True, the threats could sound convincing with the right delivery — anything can sound ominous with the right delivery. But Swift's lines start out wrapped in a melodic cadence that (matched with production that manages the neat trick of being both lurching and insubstantial) can only be described as 'Disney-villain karaoke,' leaving it only when she broods monotonously in spoken word."

Variety: "There are grander hooks in store."

"It's part of the cleverness of the song that the tune's pre-chorus seems to be building up to something big, only to drop into something so flatly stated, steely-eyed, and subwoofer-based. Whatever grander hooks she has in store (and based on past experience, you'd have to imagine there will be plenty on 'reputation') will have to wait until after this alluringly scowling teaser trailer of a single."

"Here, she's uncharacteristically un-nuanced, and when she slips in hilariously artless digs like 'I don't like your tilted stage,' it sounds like the part of a break-up when you start hurling all the banal insults you've got left."

Spin: "The self-mythologizing is verging on satire."

"Endure the first few repeats of 'Look What You Made Me Do' and the claws begin to sink in. There's that strangely taut beat, the plasticine propulsion that unites so much of Antonoff's work. For long enough to sing, 'I don't trust nobody and nobody trusts me,' Swift sounds the part of the self-aware bad girl, instead of a humorless Peaches. Her hammy little skit—'I'm sorry, the old Taylor can't come to the phone right now. Why? Because she's dead.'—is a meme already, but not one that helps her reputation. The self-mythologizing is verging on satire, the beef with West feels endless and increasingly futile, but the machine is in motion, and the demand for Taylor Swift remains infinite."

Rolling Stone: "This might be the biggest test of her artistic capabilities yet."

"As she pushes forth into her Reputation era, owning her bad press instead of merely brushing it off appears to be a good look on Swift. A little touch of camp could make her transformation complete, but for someone who has been as consistently earnest as Swift, leaning into her darker side might be the biggest test of her artistic capabilities yet."

The Guardian: "The lyrics are visceral and almost sloppy."

"Swift's lyrics are visceral and almost sloppy, with her rhyming 'time' and 'time' on the Lorde-channeling pre-chorus, and melodramatically declaring that 'the old Taylor' is 'dead!' The chorus borrows its cadence from Right Said Fred's 1992 body-shaker 'I'm Too Sexy,' a ridiculous touch that at least cuts the acid a bit. There's also a callback to Britney Spears' similarly metatextual 2007 track 'Piece of Me,' which made oblique references to the tabloid-chronicled problems that had plagued her earlier that year.

LA Times: "It blows past the production clichés."

"Swift and Antonoff blow past the production clichés of clap tracks and hiccuped syllabic hooks that have proliferated across Top 40 fare in recent years with boldly inventive textures and fresh melodic, rhythmic and sonic accents. Musically, the track is constantly shifting, a manifestation of the myriad conflicting and conflicted emotional states expressed in the lyrics."

The New Yorker: "This is celebrity fan fiction as pop music."

"Produced by Jack Antonoff, the song picks up the nineteen-eighties electro-pop thread of Swift's last album but shifts hard toward a darker, more industrial sound. Lyrically, Swift paints herself as the antihero of a neo-noir thriller: 'The world moves on / But one thing's for sure / Maybe I got mine / But oh, you'll all get yours,' she sings. You imagine her seething quietly in the metaphorical shadows of the Kardashian-West home, donning red lipstick and clutching a knife. Swift, having successfully graduated from country to pop, is now finding a home in the world of camp. This is celebrity fan fiction as pop music."

Slate: "Young-woman-empowerment pop has moved from its imperial renaissance into baroque decadence."

"If this is what the young-woman-empowerment pop that joyfully dominated the charts earlier this decade has come down to, the form has moved from its imperial renaissance into baroque decadence."

Newsweek: "It has juvenile lyrics and an inelegant tone."

"The new Taylor is apparently a musical version of the Bride from Kill Bill. But 'Look What You Made Me Do,' with its juvenile lyrics and inelegant tone, misses its intended target. Swift has come to a swordfight armed with a butter knife."