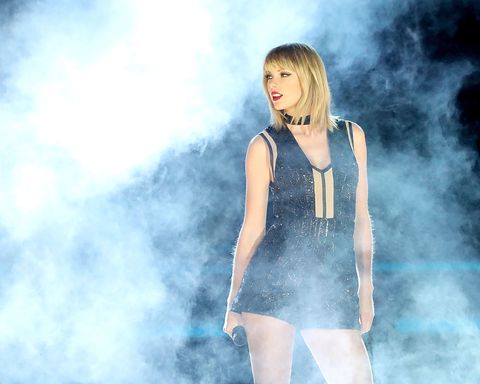 Taylor Swift's megahit "Shake It Off" is all about shrugging off her detractors—and that's just what she's doing in the wake of a new lawsuit over the song's lyrics.

TMZ reports that Swift is being sued by two pop songwriters who say her lyrics to "Shake It Off" are too similar to their lyrics for the 2001 song "Playas Gon' Play" by the girl group 3LW. According to the report, songwriters Sean Hall and Nathan Butler claim 20 percent of Swift's song is theirs, and are demanding a large sum of money in the suit.

For comparison, here are the lyrics to the chorus of "Playas Gon' Play": "Playas, they gon' play / And haters, they gonna hate. / Ballas, they gon' ball / Shot callers, they gonna call / That ain't got nothing to do with me and you / That's the way it is." The song was pretty big at the time, hitting number 81 on the Billboard Hot 100.

Taylor's rep blasted the lawsuit in a statement to MarieClaire.com: "This is a ridiculous claim and nothing more than a money grab. The law is simple and clear. They do not have a case."

This isn't even the first time Swift has been sued over the song. People reports that in 2015, a judge dismissed a lawsuit from singer Jesse Graham, who claimed Swift took the "haters gonna hate" lyric from him. The judge couldn't resist using Swift's own lyrics to dismiss the whole thing: "Upon consideration of the Court's explanation in Part II, Braham may discover that mere pleading Band-Aids will not fix the bullet holes in this case," U.S. Magistrate Judge J. Standish said. "At least for the moment, Defendants have shaken off this lawsuit."