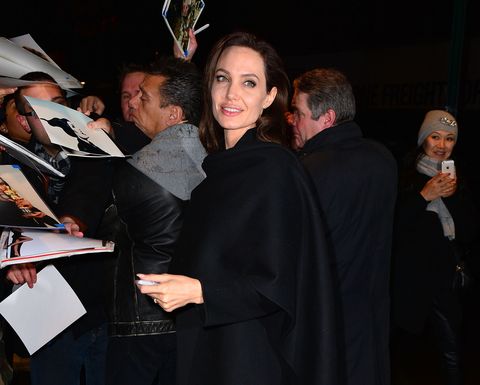 A massive leak of data from Sony Pictures' offices has made the movie business seem much less glamorous. The latest data dump even shows a movie producer trash-talking Angelina Jolie.

Hackers have been going after Sony for more than a week now, and some speculate it's because they're releasing The Interview, a James Franco/Seth Rogen comedy about trying to kill North Korean leader Kim Jong-Un. The so-called "Guardians of Peace" have released salary info, Social Security numbers, medical information, and private emails of Sony employees.

On Monday night, hackers dumped the email inbox of Amy Pascal, co-chairman of Sony Pictures, onto file-sharing sites. And as reported byDefamer, one of the juiciest email chains involves a major fight with movie producer Scott Rudin over a Steve Jobs biopic.

Pascal had a heated exchange with Rudin this February when the state of the movie Jobs, a Steve Jobs biopic written by Aaron Sorkin, was uncertain. Rudin was trying to convince David Fincher, who also directed The Social Network, to take on another tech-billionaire story.

And here's where Angelina Jolie comes in: The movie star had wanted Fincher to direct her Cleopatra movie, but Rudin wanted him to directJobs instead. Timing was an issue, because Jolie finally had time to get started developing the movie after directing Unbroken, while Sony wanted to start on Jobs as soon as possible.

Pascal tried to set up meetings to straighten out the situation, but nothing was getting better, and Rudin was livid that he might lose his top pick for director. Here's an excerpt from one of his many emails, in which he refers to Jolie as "a minimally talented spoiled brat":

If you engage in this again, we will end up losing Fincher on the one we want him to do and will be stuck with shoving him onto a movie with no script that, underneath it all, you know in your heart and your brain should never be made. […] I'm not remotely interested in presiding over a $180m ego bath that we both know will be the career-defining debacle for us both. I'm not destroying my career over a minimally talented spoiled brat who thought nothing of shoving this off her plate for eighteen months so she could go direct a movie. I have no desire to be making a movie with her, or anybody, that she runs and that we don't. She's a camp event and a celebrity and that's all and the last thing anybody needs is to make a giant bomb with her that any fool could see coming. We will end up being the laughing stock of our industry and we will deserve it, which is so clearly where this is headed that I cannot believe we are still wasting our time with it.

After all that arguing, Sony ended up losing the Jobs film, with the rights going to Universal. And Fincher is nowhere near it; Danny Boyle is set to direct, with Michael Fassbender starring as Steve Jobs.