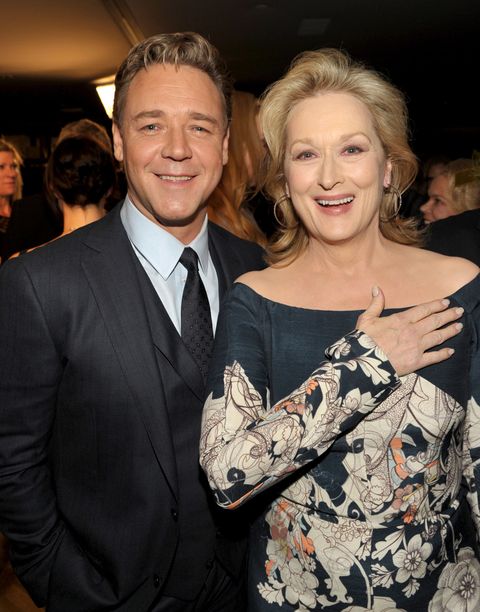 Update, 1/8: Meryl Streep heard what Russell Crowe said about older actresses, and she's...not mad. In fact, she agrees "it's good to live in the place where you are."

During a press conference for Into the Woods on Wednesday, Streep very kindly refrained from unleashing a Miranda Priestly-level schooling on Crowe and instead offered this measured response: "I read what he said, all of what he said. It's been misappropriated what he was talking about. He was talking about himself."

"The journalist asked him, 'Why don't you do another Gladiator? Everybody loved that.' He said, 'I'm too old. I can't be the gladiator anymore; I'm playing parts that are appropriate to my age.'"

Streep then couldn't help herself from adding what could be construed as a very subtle burn: "Then the conversation went on to actresses and that was proving a point that he was talking about himself, as most actors do."

Watch her in action below.

Russell Crowe might be enjoying the meaty roles and reduced workouts that come with being a middle-aged man in the movies, but he hasn't forgotten the plight of his female counterparts. In an interview with The Australian Women's Weekly, Crowe says there's room in the film industry for "people in all different stages of life," even older women.

"To be honest, I think you'll find that the woman who is saying [the roles have dried up] is the woman who at 40, 45, 48...still wants to play the ingénue and can't understand why she's not being cast as the 21-year-old," he said.

"Meryl Streep will give you 10,000 examples and arguments as to why that's bullshit, so will Helen Mirren or whoever it happens to be. If you are willing to live in your own skin, you can work as an actor. If you are trying to pretend you're still the young buck when you're my age, it just doesn't work."

And you know what? We agree. BUT. It's not the actresses who are the problem. It's society, and Hollywood, and culture at large.

It's not the actresses who are the problem. It's society, and Hollywood, and culture at large.

actress. But the sad fact of the matter is that Meryl and Helen are the exception, not the rule.

It would be the bomb if all actresses could grow up normally and win three Oscars for it instead of being made to feel irrelevant the second they have any laugh lines, but a culture that believes young equals better equals box-office sales is why actresses have a shelf life in the first place.

So Russell, we love where you're going—but maybe you can get your directors and casting agents and studio execs to go along with you? We'll be waiting.

Shonda Rhimes Has Some Powerful Words About Women in Hollywood

New Study Shows Another Disappointing Fact for Women in Hollywood