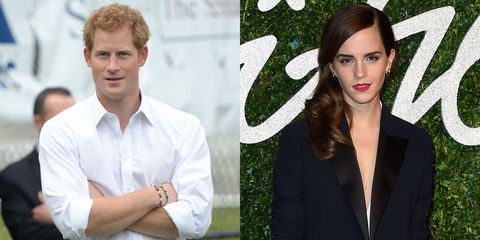 Update, 2/22: Alas, it is as we suspected—this charming little rumor seems to be nothing more than that. Why get our hopes up, world?! Why?!?

Anyway, Emma Watson took to Twitter today to break our hearts set the record straight, so we guess we have to stop fantasizing about a Harry/Hermione union.

WORLD ♥ Remember that little talk we had about not believing everything written in the media?!

Original post, 2/20: She's smart, she's beautiful, and now, she may have found her match. Emma Watson has allegedly nabbed herself a literal prince charming in the form of Prince Harry.

According to Woman's Day Australia (who can "exclusively reveal" the news), Harry heard about Watson's split from British rugby player Matthew Janney and got some mutual friends to help him woo her. He invited her to a small party among friends, because ugh, dates are just so formal.

"Harry didn't want her to feel like she was put on the spot," explained the insider. "A party also shows he's fun and not stuffy." Now, according to the same insider, the prince is "smitten."

On the one hand, this is the best news ever. On the other hand, it's not really news 'til it's actually news, and this sounds preeeetty far-fetched to us. But PLEASE LET IT BE TRUE.

Emma Watson Cast as Belle in the New 'Beauty and the Beast' Remake, Princess Synchronicity Is Complete

Samantha Leal Senior Web Editor I'm Sam, the senior editor at MarieClaire.com.
This content is created and maintained by a third party, and imported onto this page to help users provide their email addresses. You may be able to find more information about this and similar content at piano.io
Advertisement - Continue Reading Below
More From Celebrity
Alicia Silverstone Got Banned From a Dating App
The Queen Just "Reluctantly" Canceled a Trip
Advertisement - Continue Reading Below
Adele's Album Will Feature a Sensitive Voicemail
Selena Gomez Just Debuted a Sleek Bob
Zendaya Looked Incredible at the 'Dune' Premiere
Kate Middleton Is Helping Tackle Addiction
The Queen Was Advised to Stop Drinking for Now
Scott Disick Is "Not Happy" for Kourt and Travis
Emma Watson Stunned at the Earthshot Prize
Kate "Didn't Have Much Energy to Bond" With Meghan