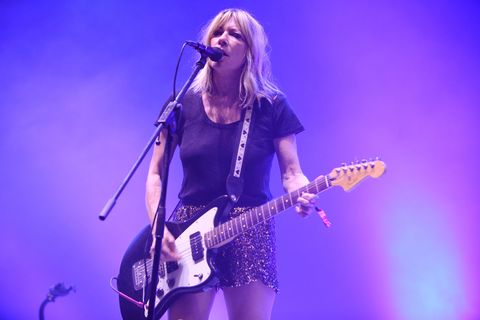 Why did you write Girl in a Band?
People were starting to ask. I think because of Patti Smith's book [Just Kids]. Writing is a way for me to think about things. I can't really even figure out what I'm thinking unless I start writing it.

You don't pull any punches with people from your past like Larry Gagosian and Courtney Love. Was it important to be forthcoming?
I didn't want it to be just a book about branding. I like to be sort of fearless about what I do. I wanted it to be emotionally revealing. There isn't really sex, drugs, and rock 'n' roll in there. I felt like I should have included a disclaimer—like, sorry.

In 2011 when you announced your separation from Thurston Moore, the Internet flocked to your corner. How did that feel?
I tried not to look at it too much. It was kind of weird to have such an outpouring, and to realize how much we were public figures. But people were very supportive. I thought that was great.

Why do you think strangers so mourned the end of your relationship?
It seemed like we were able to have a normal family and also do what we wanted. I guess you look for role models. There are a lot of celebrities who don't do anything. When you do something that people love, like playing music, I think it really touches their hearts.