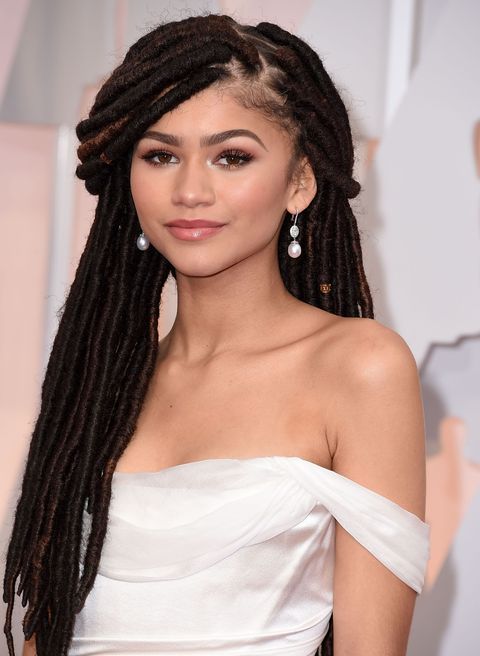 Update, 9/19: Six months after Giuliana Rancic made inappropriate/seemingly racist comments about Zendaya Coleman's *stunning* Oscars look (specifically, her dreadlocks), the Disney star wants you to know what she learned from the experience.

"My parents always taught me that there is knowledge in your voice. I could have clapped back and gone off," she tells the latest issue of Galore. "Of course I wanted to, everyone wants to do that. I just kept thinking there were other young people dealing with the same kind of issue who were watching me to see how I would respond."

Coleman didn't disappoint. Her response to Rancic was remarkably eloquent for an 18-year-old.

"I think the way we react to things is a big indicator of our character and what type of person we are," she adds. "I just had too much respect for myself and didn't want to prove everybody right that's waiting for me to be ignorant and do something dumb, so I took my time until I thought of the best way I could address the comments."

Update 3/4: A source tells People that Giuliana Rancic's full segment was cut, in which she explains the hippie reference in further detail—negating allegations that it was related to race.

The source states that Rancic's comments, in which she also mentions the Grateful Dead, were edited for time.

According to the source, Rancic can be heard saying: "Zendaya is more high-fashion. The hair to me on her is making her a little more boho. Like I feel like she smells like patchouli oil. Or weed."

Only the weed-usage joke was aired.

"She just thought it was a joke about hippies," says the insider.

Update 2/25: Zendaya has responded to Rancic's apology,  and it's as eloquent as her first message. Read it all below:

Update, 2/25: Kelly Osbourne has threatened to quit Fashion Police over the comments co-host Giuliana Rancic made regarding Zendaya's hair at the Oscars.

I DID NOT MAKE THE WEED COMENT. I DO NOT CONDONE RACISM SO AS A RSULT OF THIS IM SEREIOULSY QUESTIONONIG STAYING ON THE SHOW!

Im giving everyone involved 24 hours to make it right or the world will hear how I really feel. contactually Im not allowed to speak!

you guys do realize that @Zendaya is my friend right?

Rancic herself issued a statement on Tuesday, in which she says the incident "has taught [her] to be more aware of clichés and stereotypes [and] how much damage they can do."

"As you know, Fashion Police is a show that pokes fun at celebrities in good spirit," she says in the video. "But I do understand that something I said last night did cross the line. I just want everyone to know I didn't intend to hurt anybody, but I have learned it is not my intent that matters, it's the result. And the result is that people are offended including Zendaya, and that is not okay."

Watch the full video below.

Original post, 2/24: We get it: When you're in the public eye, it seems every fashion and beauty decision you make is up for commentary. But after a segment of Fashion Police on E!, it's become painfully clear that sometimes commentators completely miss the mark.

In the segment, which looks at Oscars red carpet fashion, Giuliana Rancic says how much she loves Zendaya, only to follow up with an offhand remark about her dreadlocks. "I think she has such a tiny frame, that this hair to me overwhelms her," she says. (Which is, in our eyes, a fair and fine comment to make.) But then things get dicey: "Like I feel like she smells like patchouli oil," Rancic states. "Or weed," someone offers. "Or weed," Rancic laughs.

To conflate dreadlocks and weed is a bit silly (hippie/Bob Marley comments always come with the territory), but the comment can also be seen as a jab at natural, black hair and the styles that we as a society define as acceptable. Do dreads really have to be associated with drug use? Does Zendaya have to change her style to be categorized as a "win" and "beautiful" in the eyes of fashion commentators? We sure as hell don't think so.

Zendaya doesn't either, writing a fantastic note on Twitter:

Rancic later apologized over Twitter, saying that her comments were not intended to be about race.

Dear @Zendaya, I'm sorry I offended you and others. I was referring to a bohemian chic look. Had NOTHING to do with race and NEVER would!!!

Whatever the intent, we think the idea was clear: Dreadlocks give the wrong impression. Dreadlocks are not seen as "acceptable" for a red carpet. But guess what? They are perfectly acceptable. They are beautiful. And if you happen to rock locs or natural strands, remember: Like Zendaya says, your hair is "good enough."

Our 10 Favorite Beauty Looks from the Oscars

The Oscars in GIFs