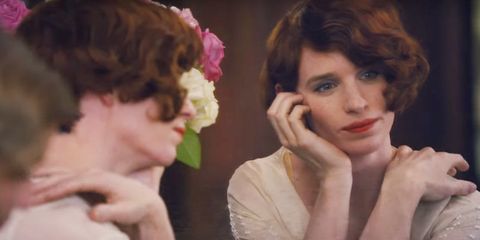 Update, 9/15: In an interview with the Hollywood Reporter, Eddie Redmayne and Danish Girl director Tom Hooper explain the reasoning behind the film's controversial language.

While preparing for the role, Redmayne feared that having Lili Elbe refer to herself in the third person, while historically accurate, would "pathologize" the character and suggest that she suffered from bipolarity. After debating the issue, however, Redmayne and Hooper sided with authenticity.

"I kept feeling that if that was the way the real Lili made sense of it, who are we to say that that is no longer the way someone would talk about it now, and that we should go back into history and change that language?" Hooper said.

Update, 9/1: Judging by the first trailer for The Danish Girl, we're all going to leave the theater teary-eyed and wobbly-lipped. There's no way around it.

Following artist Lili Elbe from the moment that triggers her self-discovery (posing as a woman for her wife Gerda, played by Alicia Vikander) to her groundbreaking gender reassignment surgery, the 2-minute clip in itself tells a powerful, courageous story. Starting the countdown to Nov. 27 now.

Update, 8/27: Under the tagline "Find the courage to be yourself," the first official poster for The Danish Girl has been released.

You can't see it, but in one of the lines of super tiny print at the bottom, it says "A travel pack of tissues won't be enough. Bring paper towels." Come Nov. 27, that's just what we'll do.

Update, 8/12: In an interview with Out magazine, Eddie Redmayne admits that, before he played Lili Elbe in The Danish Girl, he had a lot to learn about transgenderism.

"It's a civil rights moment," he said. "My greatest ignorance when I started was that gender and sexuality were related. And that's one of the key things I want to hammer home to the world: You can be gay or straight, trans man or woman, and those two things are not necessarily aligned."

While preparing for the role, Redmayne said he was touched by the openness the transgender men and women he talked to displayed when sharing their stories, and that one woman's groundbreaking, public transition inspired him in particular.

"I absolutely salute Caitlyn Jenner's courage," Redmayne said. "Hers is a very specific story, and it's one that shouldn't stand for everybody's.But it is amazing what she's gone through and how she's done it.

Original story, 2/27: It's an English public-school tradition that boys play girls so that when they grow up and invade Hollywood, it's really NBD—especially for Eddie Redmayne, the prettiest actor/person of all.

The Oscar winner stars in The Danish Girl, about transgender artist Lili Elbe, who was one of the first to undergo gender reassignment surgery in the 1930s. In the first still from the movie, Redmayne appears in a chic wavy bob, red lips, some kohl, and what appears to be a little boobage. It is very convincing and unfair for someone to be this attractive.

Amber Heard and Alicia Vikander also star in the film, which comes out in 2016. In the meantime, please enjoy this clip of Conan O'Brien pointing out that a young Eddie Redmayne in Twelfth Night is a dead ringer for Jennifer Garner: