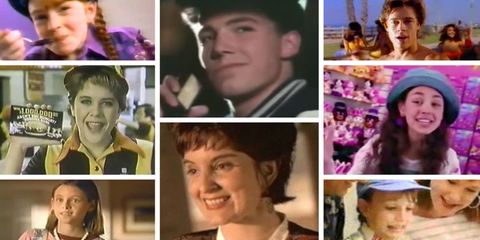 Despite the fact that 5-year-old Gellar was ADORABLE campaigning for BK's $0.39 hamburgers in the '80s, it got her into hot water:

"When I was 5 I did a commercial for Burger King," Gellar explained in a 2004 interview. "McDonald's were so outraged, they sued Burger King and named me in the lawsuit," Gellar said in aabout one of the ads, which compared the two fast food chains' burgers. "I wasn't allowed to eat there. It was tough because, when you're a little kid, McDonald's is where all your friends have their birthday parties, so I missed out on a lot of apple pies."

In 1989, Affleck plays an all-American bro who receives an accidental call from a woman hoping to order in Burger King (because that's a thing). Just as he's delivering her food, his uh, car phone, rings and he's got to get back for curfew and loses out on winning her over with a Whopper....

Here's a little-known fact: LiLo was a member of Cos and the Gang, a '90s rap group that rapped exclusively about purple jello. Their 1995 hit, "Kids Go Ape," really holds up. Trust.

Fact: Mila Kunis, like us, spent the '90s coveting all the Lisa Frank—what more can she say?

Leo stars alongside a "loud-thumpin', tune-pumpin' Boombox," which is a natural counterpart to a chunk of Bubble Yum, but rest assured, unlike a stereo it'll "never blow out," and "keeps it poppin'."

Brad Pitt has always been as hot as he is at present. As cool? That's up for question thanks to this '80s beach scene gold.

Stewart has a cool dad. What exactly does that entail in 1999? It means getting a vroomy-esque ride in his Porsche when you miss the bus.

What makes that meat a culinary thrill? Maull's Barbeque sauce and a 1993 Britney Spears cameo.

If Fey could perform anything before our eyes, we'd like it to be a spot-on parody of herself in this '90s bank commercial (down to her carpet-print vest, of course).

We're seen Ryan enthusiastic many times over, but nothing compares to her utter eagerness to share Burger King's "Aren't You Hungry" Whopper Game. Sorry Affleck, but she's got you beat.

The year? 1991. The product? Super Nintendo. The actor? Paul Rudd. You're welcome.

A sheepish Ruffalo only "vaguely" recalled this throwback moment in his career when it was unearthed by Jimmy Fallon, and we can see why he might've suppressed the memory. In this 1989 commercial for Clearasil, Ruffalo is faced with the struggle of teenage acne. Watch the young actor in all his curly-haired '80s glory as he zap, zap, DOUBLE ZAPS his zits with Clearasil's Double Clear pads.

If this Unionbay ad doesn't scream early 2000s, we don't know what does. And there's Jenna Dewan Tatum—before she hit everyone's radar in Step Up opposite her now-husband Channing Tatum—looking tanned and toned and adorable as ever.