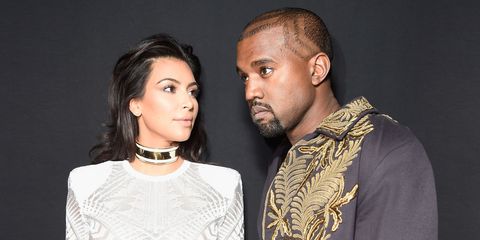 When Kim Kardashian wants something, she goes after it. A piece of the Silicon Valley marketplace. A bleach blonde 'do. And apparently Kanye West. In fact, she even made the first move—and isn't shy about admitting it.

"I was always attracted to him," Kardashian said in a new interview with Access Hollywood. "When I first met him, we worked on a project together and there was definitely a spark, but we were in other relationships and we kept our distance, and that was that." After that, they "stayed in touch," but eventually the stars aligned. "And then, I think it was six months after I was newly single in 2012, I was like, 'Why not? Like, what am I waiting for?'"

It began with a fateful (and impressively...um...confident?) call: "I called him because I'm sure it was really hurtful that I got married. And even though it's not like we communicated all the time, I knew what he was thinking. So I thought he was going to call me as soon as he knew that I was single again. And he didn't. And so I called him and I said, 'Hello? I thought you were at least going to call me and say 'I told you so,' something.'"

After that initial leap, West invited her to a fashion show in Paris (we're going to go ahead and assume it was his own Fall 2012 presentation) and that's where "the magic happened."

For old time's sake, here's Kardashian at the show clad in the $6,000 Kanye West for Giuseppe Zannoti shoes that, looking back, were very much an unapologetic mating call.

Getty Images
Lauren Valenti Associate Web Editor I’m the associate web editor at Marie Claire.
This content is created and maintained by a third party, and imported onto this page to help users provide their email addresses. You may be able to find more information about this and similar content at piano.io
Advertisement - Continue Reading Below
More From Celebrity
The Queen's Hot Grandnephew Is a Thirst Trap
Watch Diana Play Impromptu Piano in Rare Clip
Advertisement - Continue Reading Below
Peek Inside the Cambridges' Country Home
Harry Is Heartbroken About His Family Situation
William and Harry Could Fight Over Diana's Legacy
William Reveals Which of His Kids Is the Cheekiest
Serena Williams's Daughter Is Taking After Mom
EmRata Opts for Faux Fur and Yeezy Boots
Rob Lowe: Prince Harry Is Rocking a Ponytail Now
Rihanna Stuns in $2 Million of Diamonds and Rubies