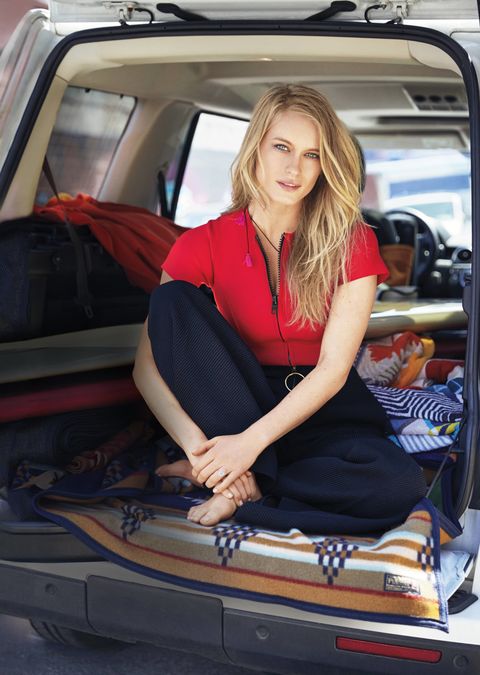 "I was cast in Chasing Mavericks, a 2012 movie about a big-wave surfer from Santa Cruz, California, named Jay Moriarity. (I played his girlfriend, Kim.) As training, I surfed every day for two or three hours."

"It was like learning to run before you can walk. Santa Cruz in the winter has pretty intense conditions. swell gal I've always been a tomboy, but I never thought I was a big water-sports person. Once I got into the water and the culture, something just took over me."

"The first time I surfed on a beach break (a wave that breaks over a sandy seabed) was in El Salvador—I didn't realize it's a totally different skill. I just ate it time after time. It made me realize I don't know everything there is to know."

"When I close my eyes and think about surfing, I think about my friend Kaila Pearson (we met when I was training for Chasing Mavericks); she's a mermaid goddess. Being out in the ocean, on our big boards, dolphins jumping around us—so fun."

"You have to be in sync with nature. It's peaceful, and healing, and very rewarding when you're up on that wave. Plus: no cell phones."

This article appears in the July issue of Marie Claire, on newsstands June 23.

This content is created and maintained by a third party, and imported onto this page to help users provide their email addresses. You may be able to find more information about this and similar content at piano.io
Advertisement - Continue Reading Below
More From Celebrity
A Brief History Lesson on Brad and Jen
Rihanna and A$AP Were Spotted on a Date
Advertisement - Continue Reading Below
Prince Harry Is "Really Missing" Meghan Markle
J.Lo and A-Rod Are "Completely Back On"
Chrissy Shared the Cutest Photo of Luna and Miles
Gaga Stuns in a Wedding Dress for 'House of Gucci'
Prince Harry Is Quarantining at Frogmore Cottage
Meghan Markle Expresses Sympathies to the Queen
Prince Harry Remembers Prince Philip
Prince William Statement on Prince Philip's Death