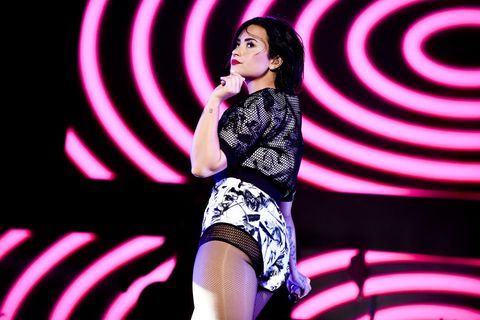 As a world-famous celebrity who essentially grew up in the spotlight, Demi Lovato has had to deal with her body being the focus of unsolicited comments and criticism for years—and now she's taking it back as her own, one body-positive Instagram at a time. Here's her latest inspiring post:

"Learn to lurrrrrvveee yerrrrr currrrrvveees," she wrote. "I actually used to hate them... But then a special someone helped me learn how to love them... And he sure loves them...."

(We can only speculate that "he" refers to longtime boyfriend Wilmer Valderrama, BTW.)

Lovato has long been vocal about her struggles with body image and an eating disorder. But now, the singer admits that her Latina heritage—along with the prevalence of more curvy role models in mainstream culture—has helped her love and appreciate her body.

"When I was growing up and when I was a pre-teen, the people that I had to look up to [for] body image were extremely underweight…They were all very bony at that time and that was the in thing," she told Access Hollywood.

"I really credit women like Beyoncé and Kim Kardashian…They completely revolutionized what our generation's view of perception of what beautiful is and I really think that they had a huge impact on that. You can think whatever you want about the Kardashians, but they really did help tons of women feel comfortable in their own skin and I like to carry that message on."