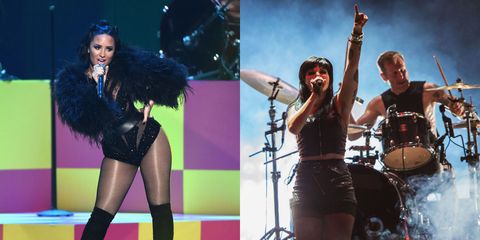 If Demi Lovato's track "Stars," sounds familiar, it may or may not be because it bares a striking resemblance to Sleigh Bells "Infinity Guitars," AKA the epic, guitar-riffed anthem from The Bling Ring trailer.

The Brooklyn-based pop duo feels so strongly that two of their samples (the other being "Riot Rhythm") were swiped without permission, they took to Twitter to air their grievances.

.@ddlovato Demi Lovato flattered you guys sampled Infinity Guitars & Riot Rhythm for "Stars" but we were not contacted. Gotta clear those.

In response, the producers of Lovato's songs, Carl Falk and Rami, adamantly denied using Sleigh Bells' work for the song, as well as cleared Lovato's name.

"We did not use any samples in Demi Lovato's song 'Stars,'" they told Rolling Stone in a joint statement. "Demi was also not involved with the production. She only wrote top line."

Despite this, Sleigh Bells is not backing down. "I can confirm that the band feels their music has been sampled without proper clearance and are seeking all available remedies with [Lovato's record label] Island Records," their rep revealed. As for Lovato herself, she has declined to comment.

As fans of both of these artists, the situation is kind of a bummer. But whatever the case is behind the production, it's safe to say that it seems there was no intentional wrong doing on Lovato's part.

Listen to all the songs below:

Lauren Valenti Associate Web Editor I’m the associate web editor at Marie Claire.
Advertisement - Continue Reading Below
More From Culture
'Good Girls' Is Back for an Explosive Season 3
Netflix's 'Haunting of Hill House' Will Return
Advertisement - Continue Reading Below
Criminal Minds Season 15 Will Be Its Last
The Hot New Podcasts to Add to Your Queue
Who Are the Women of 'The Bachelor' in 2020?
Join Marie Claire's Virtual Monthly Book Club