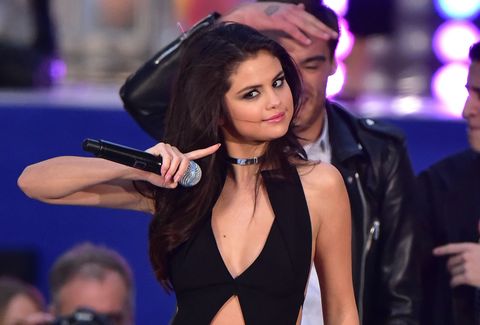 She may be number one among Taylor Swift's world-famous squad, but that doesn't mean Selena Gomez is tied down to T. Swift and her never-ending 1989 Tour besties forever. And if the 23-year-old's most recent tweet is any indication, it does indeed appear that she is more than capable of reigning over her own regime. (Sorry, Tay.)

Making it easy on the "Same Old Love" songstress? She already has two very famous friends fully prepared to take their places in the Sel Squad. And they happen to be none other than her pop peers, Demi Lovato and Ariana Grande. Couldn't get any better, right? We know.

You're probably wondering how this juggernaut of #friendshipgoals came to be. Well, it all started out on the Internet (as most good things do these days), then reached new levels of girl power thanks to some kind words from Ariana, and was finally commenced with a special blessing from Selena. But before you start thinking up music video concepts for these three à la "Bad Blood," we'd like to first dissect the way in which it really all began.

Let's go back to the beginning when Demi and Selena reestablished their once-fractured relationship earlier this summer...

@selenagomez I'm glad you were born too... 😝 #nomatterwhat #forever 💗💗💗

And an even sweeter/slightly silly selfie:

Okay, so after the former Disney stars had gotten themselves back on track, that meant go time for Ariana to swoop in. Because why not?

had to hit up @ddlovato last night and text her a bunch of “ yaaaas"es & "werrrrrk"s because of these vocals on #confident! you diiiid that!

Resulting in much excitement for Ariana's upcoming release for Focus:

And with so many good vibes circulating around the Twittersphere, Ari couldn't help but also give praise to friend-of-a-friend Selena for her latest LP, Revival:

and while we're on the topic of new music I have to mention #REVIVAL is so effing good @selenagomez!! I'm in love. ♡♡

i love nothing more than seeing young women doing what they love & kicking ass at it.

Which then prompted all-caps approbation from the hair extension-loving star, proving she is more than ready to take this love fest offline and make it a thing IRL:

Now how about some sort of song collab or maybe even a joint tour? Just something to think about, ladies.